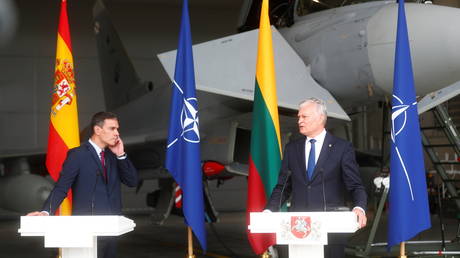 Prime Minister Pedro Sanchez had been delivering a speech at an airbase in Lithuania on Thursday when an urgent alarm was raised to deploy a nearby jet, forcing him to suddenly halt the conference.

Sanchez’s press appearance with the Lithuanian President Gitanas Nauseda was abruptly stopped when the plane had to execute a rapid takeoff from the Baltic country’s NATO Siauliai airbase, where some 134 Spanish troops are stationed.

Both the prime minister and president appeared puzzled in the video footage after they were interrupted following an alert that an unidentified plane was flying over the Baltic Sea. People nearby scrambled to vacate the premises, gathering the nations’ and NATO flags to make way for the plane. However, the press conference resumed within 12 minutes after the aircraft had taken off.

Sanchez has been on a tour of the Baltic region since Tuesday to mark the centenary of bilateral relations between Spain and the three states: Latvia, Lithuania and Estonia. The Spanish prime minister began his visit in Estonia on Tuesday, followed by Latvia the next day. Lithuania was the last stop on the tour.