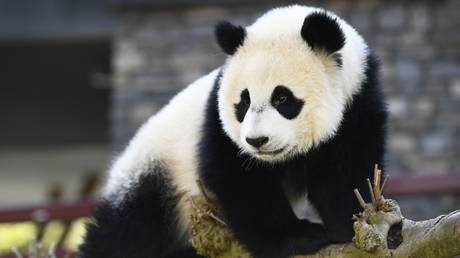 The giant panda has been moved one level up on China’s extinction threat scale due to its increasing numbers, the country’s conservation chief has said.

“The panda population in the wild has risen to about 1,800, which reflects their improved living conditions and China’s efforts in keeping their habitats integrated,” Cui Shuhong, China’s environment ministry’s top official in charge of conservation, said, as quoted by Chinese media.

Cui explained that wildlife habitats have improved due to the country’s complex nature conservation system.

“This is great news,” Chinese Foreign Ministry spokesperson Wang Wenbin said, adding that the living conditions of other rare and endangered species have also improved in recent years. He said sightings of animals like the Siberian tiger and the Chinese mountain cat are now more frequent.

It was reported that China’s wild panda population has grown from 1,596 to 1,864 between 2003 and 2013, when the last census was taken. Their status has been moved up from ‘endangered’ to ‘vulnerable’ on the country’s seven-level threat scale.

The levels are extinct, extinct in the wild, critically engendered, endangered, vulnerable, near-endangered, and non-endangered.

Also on rt.com
Elephant that left China’s ‘long march’ herd and went solo is captured & brought home, after wandering too close to railway

The media quoted an official at the giant panda research and conservation center in China’s southwestern Sichuan region as saying that the animals will remain under the national protection plan.

One of China’s national symbols, the giant panda has become a global mascot of the fight against animal extinction. The animal is featured on the logo of the World Wide Fund for Nature (WWF), the world’s largest conservation organization.

The WWF said on its website that while the growth of the panda population remains very slow, their overall increase since the late 1970s is “a real success story.”