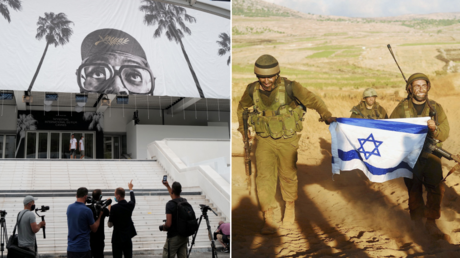 Israel’s culture minister blasted as hypocritical the decision of Palestinian actors starring in the film ‘Let There Be Morning’ to protest “apartheid in Israel” by not attending its first screening at the Cannes Film Festival.

The demarche of the cast members, including Jonah Suleiman, Erin Saba and Salim Dow, came as a surprise on Thursday evening. In an open letter to organizers of the prestigious event, they said there was an obvious contradiction between the movie’s themes of “physical and mental oppression of the Palestinian people” by the Israeli government and the fact that it was being screened at Cannes as an Israeli production. “Accepting that would normalize apartheid and allow the denial and laundering of crimes against the Palestinians,” the letter read.

Our refusal to attend the Cannes Film Festival under the definition of an ‘Israeli film’ is not just a symbolic step. We oppose our integration through our exclusion and erasure.

The protest was criticized by Israel’s new culture minister, Hili Tropper, who said that people “who knew how to ask the state for a budget to make films” are in no position to “be ashamed of Israel”.

According to Israeli media, the ‘Let There Be Morning’ filmmakers received some $610,000 in budget funding in 2018 and the agreement to screen it as an Israeli production was part of the grant conditions. Money also came from Israel’s Channel 10 and the French government through a grant secured by its French co-producer Yael Fogiel.

The movie, which was directed by Israeli director Eran Kolirin, is an adaptation of a 2006 novel by Palestinian writer Sayed Kashua. The plot revolves around a Palestinian village blockaded by the Israel Defense Forces (IDF) and an Israeli Arab accountant who gets trapped in it after coming from Jerusalem to his brother’s wedding.

‘Let There Be Morning’ is scheduled to premiere on Saturday at Cannes’ Un Certain Regard selection and is the third movie directed by Kolirin shown at the French international festival.

The director was supportive of the cast members’ decision but asked them to refrain from calling it a boycott. “That terminology is incorrect, and plays on common tropes that people want to hear,” he told the newspaper Haaretz in an apparent reference to the Boycott, Divestment and Sanction movement, which the Israeli government considers a threat to its national security.

“They have decided on a political act of absence to protest cultural erasure,” Kolirin said. “I understand that, and support their every decision. It hurts me that they won’t be there to celebrate their stunning work, but I respect their position.”

On Wednesday, another Israeli film premiered at the Cannes Film Festival. The semi-autobiographical ‘Ahed’s Knee’ was directed by Nadav Lapid, who is vying for the Palme d’Or Award for his work.

The protagonist is a torn filmmaker developing a new movie about Palestinian child activist Ahed Tamimi while getting support from the Israeli Culture Ministry to promote his previous award-winning work. The title refers to a remark by an Israeli lawmaker, who said Tamimi should have been shot “at least in the knee” for slapping an IDF soldier.