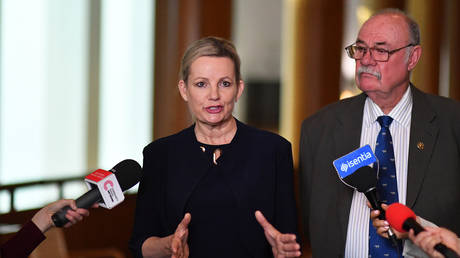 Australia’s environment minister has come under fire for announcing her intent to appeal a court ruling that found she had a duty to protect children from harmful climate change effects related to a proposed coal mine expansion.

On Thursday, the Federal Court of Australia had formalized its ruling in a class action suit brought by eight teenagers that sought an injunction to stop minister Sussan Ley from approving expansion plans for the Vickery coal mine project in the state of New South Wales.

In his judgement, Justice Mordecai Bromberg said the minister had an obligation “to take reasonable care” when making her decision to “avoid causing personal injury or death” to Australians under 18 “arising from emissions of carbon dioxide into the Earth’s atmosphere.”

However, less than a day into the mandatory four-week appeal period, Ley said in a statement that she had “formed the view there were grounds on which to appeal” after “carefully considering” the ruling, but did not give further details.

The case had been fought on two legal fronts: the injunction on the expansion itself and that Ley would be in violation of a common law “duty of care” if she used powers granted by the Environment Protection and Biodiversity Conservation Act (1999) to approve the expansion.

During the case, the court was told that the controversial expansion plans could see the release of an additional 100 million tons of carbon dioxide – roughly 20% of the country’s yearly climate footprint.

Describing the effects on climate change as “catastrophic,” Bromberg referenced the potential for heat stress-related death and deadly bushfires as he pronounced his ruling.

Australia is one of the world’s largest coal exporters and has not signed up to a zero emissions target by 2050. It also ranked amongst the worst performers in terms of action taken to cut greenhouse gas emissions in the UN’s recently released Sustainable Development Report 2021.

Responding to Ley’s statement, Anjali Sharma, the student listed as the primary plaintiff in the case, told Reuters she found it “pretty embarrassing” that the government would challenge the decision.

“Sussan Ley is now taking it to the courts to prove her right to harm the environment. It is pretty disappointing,” Sharma said, adding that since they “beat her once in court… there’s no reason why we can’t do it again.”

“The attitudes in Australia are shifting. It’s only her, the gas industries and the coal industries that are dragging their feet and sooner or later they are going to have to catch up with the rest of the country,” she added.

A message from the Instagram account of the students’ ‘ClassAction4Climate’ group called out Prime Minister Scott Morrison’s government for “its intention to continue to spend taxpayer money fighting for the duty to not care about Australian children.”

Another of the plaintiffs, Bella Burgemeister, tweeted that Ley “thinks she has a duty to do harm.”

Questioning the “Morrison government’s intent” to appeal the duty “about life and death for Australian children,” David Barnden, the lawyer representing the group, told the Guardian it was “inconceivable that an environment minister… would seek to rid herself of this sensible responsibility.”

The Minister has signalled her intent to appeal the Sharma decision.

We will vigorously defend the rights of children not to suffer injury or death from climate change at the hands of a government intent on approving new fossil fuel projects.https://t.co/laLhrx2JIp

The majority of social media users responding to the news agreed that Ley had gotten her priorities mixed up, with some even questioning whether she knew which ministry portfolio she held.

Minister, there appears to be some misunderstanding. This is still correct, isn’t it? pic.twitter.com/fU2BgbNBH0

Student climate activism group ‘School Strike 4 Climate Australia’ noted that it was “strange” how the environment minister “doesn’t care about us” while parents’ group ‘Australian Parents for Climate Action’ said the government’s role was to protect its citizens “especially in the context (of) climate risk.”

Some people found the turn of events “amazingly analogous” to the aftermath of the ruling in May by a Dutch court that oil giant Shell had to cut both its and suppliers’ greenhouse emissions down 45% compared to 2019 levels by 2030.

It is amazingly analogous to @Shell both welcoming the Dutch court ruling that they need to cut corp emissions 45% by 2030, but also angrily appealing it. https://t.co/7P9kSa4xNg