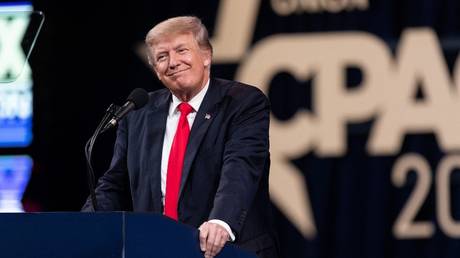 In a speech to fans in Texas, Donald Trump repeated claims of election fraud and tirades against “cancel culture.” He also uttered one phrase his opponents would likely agree with, saying he “became worse” after being impeached.

Trump took the stage in Dallas, Texas on Sunday night to close out the Conservative Political Action Conference (CPAC), a yearly or twice-yearly gathering of politicians, activists and celebrities from the American right. The CPAC crowd is as friendly to Trump as crowds get, and the former president served them up his signature partisan jokes, rants and one-liners.

He railed against President Joe Biden and the Democrats, whom he accused of “rigging” the 2020 election against him. The audience agreed, breaking into chants of “Trump won!” He thundered against immigration, accusing Biden of turning the US/Mexico border into “the single greatest disaster in American history” and lambasted “big tech’s attack on free speech,” days after suing the social media platforms that banned him in January.

All of these complaints and grievances are standard Trump fare, but the receptive crowd at CPAC gave him the opportunity to try out some new material. Turning on his former attorney general, Trump claimed that Bill Barr “became a different man” after House Democrats “viciously stated that they wanted to impeach him” last year.

“I didn’t become different,” Trump quipped. “I got impeached twice. I became worse.”

His opponents would likely agree with that statement, but “worse” to his supporters clearly meant “better,” as they broke out into applause and cheers.

Trump’s headline appearance, and the warm reception he received, served as a reminder that although he is out of power and absent from social media, he still sets the Republican Party’s agenda. His former vice president, Mike Pence, who voted to certify Biden’s electoral victory, did not appear at the event and was booed and heckled at a conservative conference in Florida several weeks ago.

CPAC is considered an opportunity for potential Republican presidential candidates to audition in front of the conservative base, and Trump – who has dropped several hints recently at another run for the White House in 2024 – seemed to acknowledge this. “The Democrats want me out… and here I am. I could have a nice, beautiful life and here I am on a Sunday in Texas,” he said, to which the crowd chanted “Four more years! Four more years!”

The CPAC Dallas Republican presidential straw poll had Trump at 70 percent, DeSantis at 21 percent, and the rest at 1 percent pic.twitter.com/U5djp3qNSh

Trump easily topped a straw poll of potential 2024 candidates conducted over the weekend and displayed at the conference. The former president took 70% of the vote, with Florida Governor Ron DeSantis coming in second with 21%. In another poll that excluded Trump, DeSantis came in first with 68%. No other prospective candidate – including former secretary of state Mike Pompeo and former UN ambassador Nikki Haley – scored more than low single digits in either poll.

And with Trump’s rhetoric echoing that of his 2016 and 2020 campaign rallies, he showed no signs of bowing out of public life any time soon.

“We will protect and defend our cherished American legacy and freedom for ourselves, for our children, and for every future generation,” he concluded. “My fellow Americans, our movement is the greatest in American history, and it has just begun.”