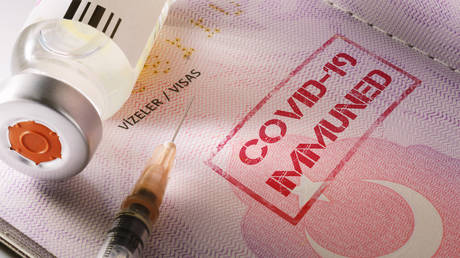 With files from the Canadian Press

There has been lots of debate around the idea of a national vaccine passport system in Canada to better facilitate travel and to help clarify access to businesses and services.

The questions are only growing as the country continues to reopen after the worst of the COVID-19 pandemic and many say a standardized federal passport is necessary.

At this point, the word from the federal government is that provinces will be policing themselves – at least when it comes to interprovincial travel.

“Different provinces will be doing different things,” says Prime Minister Justin Trudeau. “Where the federal government has a role to play and where we are looking is in terms of vaccine certification for international travel.”

Quebec has already taken steps to implement a vaccine passport system in the fall but in Ontario the premier’s office says Doug Ford has no plans to make vaccines mandatory.

The Toronto Region Board of Trade is calling on the Ontario government to introduce a vaccine passport system for non-essential business activity.

Jan De Silva, CEO of the board, says vaccine passports are the only way to safely reopen larger events like business conferences. She believes it is a necessity to help revive tourism.

“The EU as of July 1st has gone live with the digital pass, and the reason why we’re so pro using that tool is that we’ve worked so hard and our small businesses have gone through multiple lockdowns that have had a devastating effect to them,” said De Silva.

“Now that we’ve got sufficient vaccine, it’s a way to start resuming a more normal form of day-to-day living.”

The Quebec government says they will impose a vaccine-passport system in September in areas where COVID-19 outbreaks occur. The system will require people to prove they are vaccinated in order enter places such as gyms and bars.

Health Minister Christian Dubé said the proposed health order will allow the government to avoid further lockdowns if cases begin to rise. He said it would also allow businesses to operate despite having COVID-19 outbreaks.

Manitoba has also been issuing proof-of-immunization cards to residents who are two weeks past their second dose.

In Alberta, Premier Jason Kenney has said the province will not be issuing vaccine passports.

“I believe they would in principle contravene the Health Information Act and also possibly the Freedom of Information and Protection of Privacy Act,” said Kenney.

Restrictions on non-essential travel at the Canada-U.S. border are set to expire on July 21.

While cases in Canada continue to drop, the U.S. has seen a recent uptick in new infections in areas with low vaccination rates. The seven-day average of new cases in the U.S. has double in the last eight days.

More than 51 per cent of the eligible population in Canada is now fully vaccinated. Almost 80 per cent have received at least one dose.

As of last week, fully vaccinated international travellers returning to Canada can forego the 14-day quarantine, including the government-authorized hotel stay.

Canadians are currently still being urged to avoid any non-essential travel.