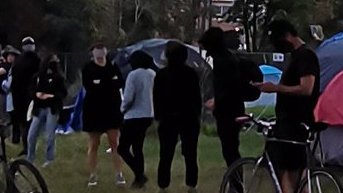 The Communist Party and other left-wing radicals are determined to stop a legal eviction Wednesday in the Liberty Village neighbourhood of Toronto. The City of Toronto plans to move the occupants of an illegal encampment to a safe location. These radical left-wing groups plan to stop the Toronto Police and the City of Toronto from clearing the park safely.

Tuesday, Toronto Police and city staff shut down an illegal camp in Alexandra Park. At least 3 people were arrested. Today, the Police and City staff plan on clearing Lamport Park due to safety concerns. According to the City, all camp occupants will be offered a safe, clean place to stay. The Communist Party of Canada plans on streaming the event.