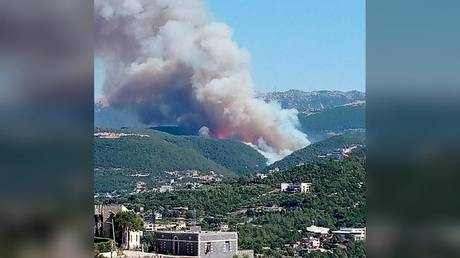 Multiple fires have broken out in northern Lebanon, devastating pine forests and threatening multiple villages. The blazes have forced some residents to flee their homes, while at least one firefighter died battling the flames.

Hot weather and strong winds have descended upon the country’s northern province of Akkar, fueling multiple wildlife fires. On Wednesday, a massive wildfire broke out close to the town of Qoubayat, the largest Christian settlement in the region.

#Lebanon: Massive fire breaks out in the forests in Kobayat, #Akkar pic.twitter.com/pk1zek7qE0

Footage from the scene shows the flames spreading extremely rapidly across wooded mountains, consuming iconic Lebanese pine forests. The blaze quickly approached the town, as well as other villages in the area.

Video taken from Akkar’s Kweshra, where the fire can be seen spreading across “el-Beereh, Sindyene, and Qobayat.” This is tragic. The area is home to some of Lebanon’s most magnificent and oldest forests. #انقذوا_القبيات pic.twitter.com/X1FnYV2jMx

The flames have forced many to flee their homes, even where it involved dashing through the hellish burning landscape in a desperate bid to save their lives, some belongings and livestock.

[PSA] Forest fires broke out earlier today in al-Qoubaiyat, north Lebanon, and continue to spread, seemingly inching toward residential areas. In a widely circulated video, people can be seen trying to flee. pic.twitter.com/hyS5sEKJXy

Ya 3adra (virgin mary) this is what this girl from Qobayat North of #Lebanon is saying while the wildfire are getting closer to the houses
God be with you#انقذوا_القبيات #القبيات #لبنان_يحترق pic.twitter.com/gkbqezfRBy

Firefighters, as well as the country’s military, have been dispatched to the area to battle the flames. At least one volunteer firefighter died in the effort after suffering an injury to the head, state-owned National News Agency reported.

President Michel Aoun has tasked army and civil defense chiefs to seek help from neighboring Cyprus. In previous years, the island nation repeatedly sent in firefighting helicopters if Lebanese wildfires got out of hand.