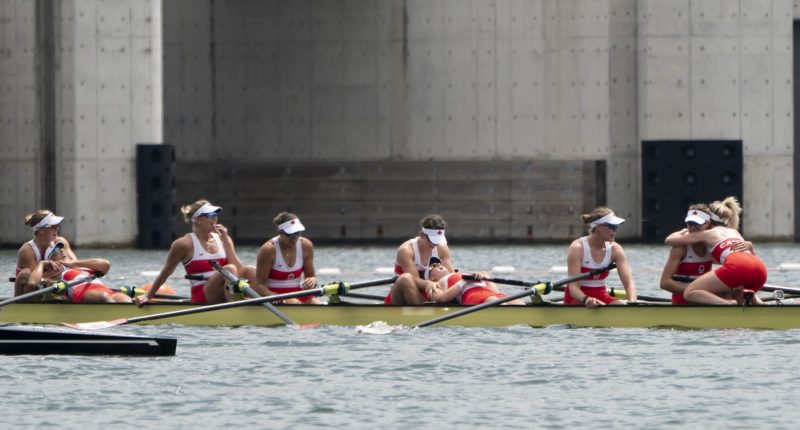 VANCOUVER — It was the moment of their dreams, coming true.

With a TV set up in the backyard of their home in Langley, B.C., Elizabeth and Mike Roman nervously watched their daughter compete in the Tokyo Olympics Thursday night.

Lisa Roman is part of the Canada’s women’s eight rowing crew, which fell far short of a medal in Rio 2016.

But the Romans felt optimistic. “She had said to us the morning before that as a team they had gelled more in the last two races, and they were just going to go and say ‘catch me if you can,’” they told JACK 96.9 on Friday.

That confidence changed to anxiety for the 30 plus people, including family who had travelled across Canada to watch the race together, gathered in the Roman’s backyard.

But they weren’t nervous long. The team pulled into the lead from the start, and held it through the 2,000 metre race.

Once the team crossed the finish line, a party broke out in the backyard.

“Everybody was crying, it was crazy. We were actually in the backyard, [Mike] bought a brand new TV and set it up in the garage and we all were outside and it was crazy,” Elizabeth said.

Much of the rest of the race was a blur after the team went over the line.

They eventually learned that Canada finished at just .91 seconds ahead of New Zealand, which placed second with a time of 6:00.04.

‘OK not to be OK’: Mental health takes top role at Olympics

The parents say the celebrations lasted well into the night, and very few guests went home.

The pair laughed as they told the “Drex On Jack” radio host that they are all feeling pretty tired after the late-night festivities.

The gold-medal-athlete’s parents say they are ‘incredibly proud,’ adding it’s hard to describe just how much.

The family is now looking forward to congratulating Lisa in person, when she returns from Tokyo over the weekend.

With files from JACK FM & Sportsnet