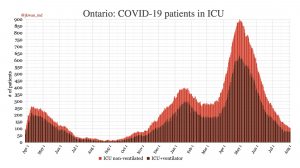 Ontario is reporting 164 cases of COVID-19 on Tuesday and 168 new cases for the holiday Monday.

The province dips back below 200 new daily infections for two straight days after reporting more than 200 for four days straight.

There were two deaths reported over the past two days. The province is reporting two days of data after not reporting numbers on the holiday Monday.

Locally on Tuesday, there are 45 new cases in the Toronto, 23 in York Region and 22 in Peel Region.

The active case count in the province increases by 50 over the past two days  – there were 151 resolved cases on Tuesday and 129 on Monday.

There are now 106 people in the ICU with COVID-19 complications and 78 ICU patients on a ventilator. ICU numbers drop to the lowest point since early November.

Ontario administered 41,121 vaccine doses on Sunday and another 31,015 on Monday.

As of 8 p.m. Monday, 81.2 per cent of Ontario residents 12 and older have received at least one dose while 70.3 per cent are now fully vaccinated.

The number of people who have been fully vaccinated in the province surpassed nine million over the weekend.

Ontario pharmacists say thousands of doses of the Moderna COVID-19 vaccine are set to expire soon and they warn the supply could go to waste if people don’t show up to get a shot.

The CEO of the Ontario Pharmacists Association said some Moderna shots are set to expire in early August, and generally, supply that arrives in bulk must be used up within 30 days.

Justin Bates said a slowdown in Ontario’s vaccine rollout and the public’s preference for the Pfizer-BioNTech shot have made it difficult for pharmacists to use up the Moderna doses.