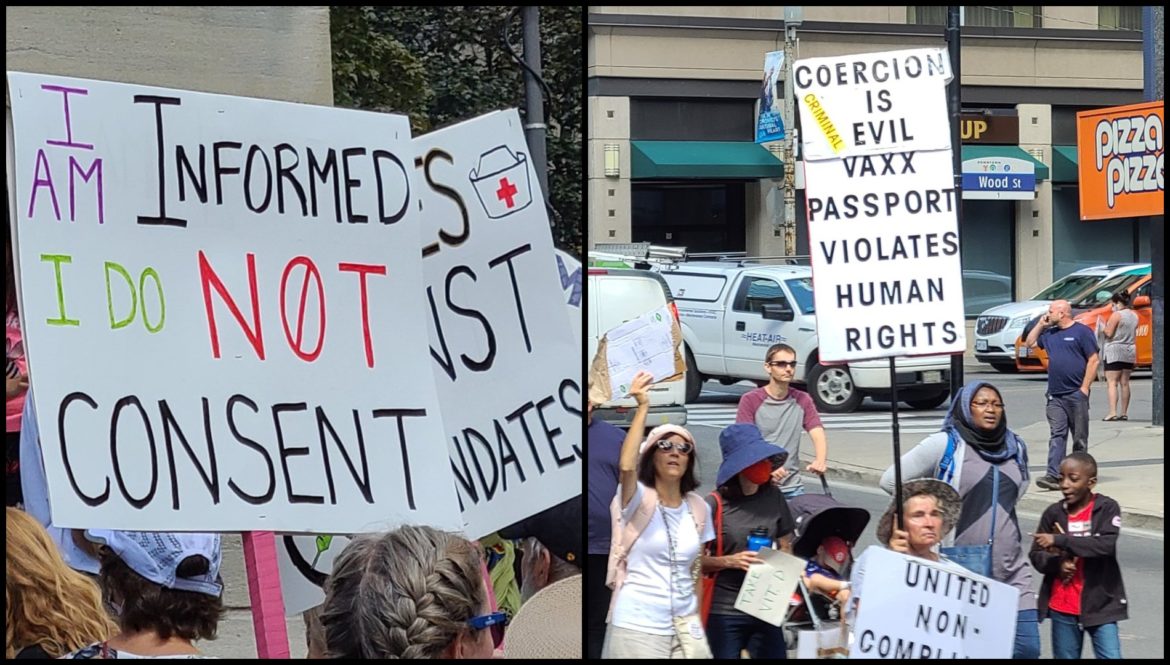 Anti-vaccine-passport protesters flooded the streets of downtown Toronto after Premier Doug Ford announced vaccine passports are coming to Ontario. Many Torontonians oppose the province’s plans to require proof of full immunization against Covid in order to enter indoor restaurants, gyms, and theatres.

On Wednesday, Ontario Premier announced vaccine passports will come into effect September 22. Notably, there is not an option for unvaccinated people to submit a negative Covid test instead of a vaccination certificate. In response to the announcement, and as part of a nationwide rally, protesters hit the streets of Toronto. The protest began at Toronto General Hospital, made its way to the Ontario Legislature, then made its way through downtown via Yonge Street. 100s of people were in attendance. A minimal number of police were present, leading to a chaotic scene.

The protesters carried signs that featured a variety of popular anti-science conspiracies. Bill Gates and other boogeymen were seen on placards, alongside familiar slogans “coercion is not consent.” Some protesters dislike the way vaccines are being forced onto people. Many of the participants echo misinformation while protesting. Another popular chant is “fake news!”

Other countries have faced similar blowback to the introduction of vaccine passports. According to the Associated Press, thousands of people in Italy and France have shown their opposition to vaccination cards.

In France and Italy, demonstrations against vaccine passes or virus restrictions in general are bringing together otherwise unlikely allies, often from the political extremes. They include far-right parties, campaigners for economic justice, families with small children, those against vaccines and those who fear them.