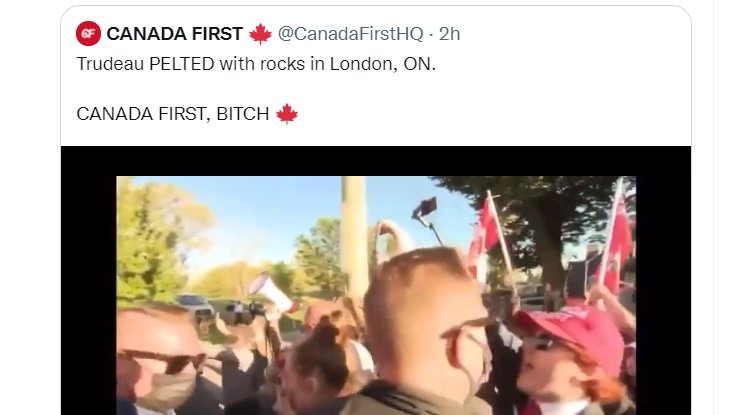 Tyler Russell, leader of the white nationalist Canada First organization was spotted at Trudeau’s campaign stop in London, the location the prime minister was pelted with rocks.

Prime Minister Justin Trudeau has faced numerous protests at campaign stops across Canada as he makes his case for re-election. Tensions escalated Monday, and Trudeau ending up getting assaulted by unknown individuals throwing small rocks. In response, Andre Picard, a columnist at the Globe and Mail responded, “How low can the ‘antivax‘ mobs go?” According to the London Free Press:

About 100 protestors, many wearing the purple of the People’s Party of Canada, gathered, chanting with signs outside London Brewing Co-Op in east London where Trudeau had stopped for a brief appearance inside with local Liberal candidates. It was his first campaign stop in London.

Chelsea Hillier, daughter of Randy Hillier and PPC candidate was at the event with her supporters. Hillier told CTV that “there is literally nowhere that [Trudeau] can go that we won’t know about it.” In a video posted on Twitter, Hillier and PPC supporters can be heard chanting “lock him up!” in reference to Trudeau. She referred to this as “quite the warm welcome.”

In addition to Hillier’s far-right fan base, Nick Fuentes wanna-be Tyler Russell was also in attendance. Russell and his movement Canada First was exposed by the “anti-hate” network earlier this year for trying to start a “white ethnostate.” According to AntiHate:

Russell advocates for an “optical approach” to white supremacy. On his show, he claims he cannot possibly be a racist, because he “loves everyone.” In public, you will rarely find him using slurs or explicitly stating his hateful beliefs. This self-censorship, he believes, makes his ideology more palatable to a broader audience. Behind closed doors, however, anything goes.

In a video posted to Canada First’s Twitter, Russell is seen screaming out at the prime minister, “Canada first bitch!” This is at the same time rocks were thrown at Trudeau. An earlier post on Canada First’s Twitter stated, “Liberals aren’t real human beings, they’re globalist bots and deserve to be treated as such.”

The issue of safety at Trudeau’s campaign stops has been raised repeatedly. Columnist Justin Ling slammed Trudeau and his entourage for not providing adequate security. In a column for the National Post, Ling stated:

“At a minimum, Trudeau himself needs to take responsibility for [the protests]. He needs to step up and fund the necessary security for the cabinet he appointed. If he doesn’t, someone is going to get killed.”