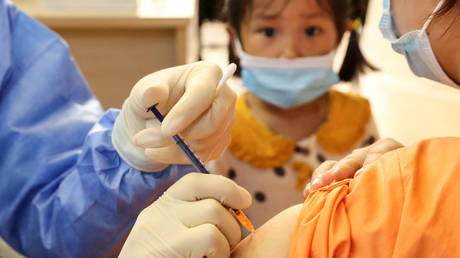 German company BioNTech, which in partnership with Pfizer developed one of the most widely used anti-Covid shots, says it’s preparing for the worldwide launch of its jab for younger recipients and might get approval in October.

An mRNA vaccine against coronavirus for children aged between five and 11 years old could be approved for use in Germany in a few weeks’ time, as early as by mid-October, Der Spiegel reported on Friday.

“In the coming weeks we will present the results of our study on the five- to eleven-year-olds to the authorities worldwide and apply for approval of the vaccine for this age group, including here in Europe,” one of the founders of the BioNTech company and its chief medical officer, Ozlem Tureci, told the German media outlet, adding, “We are already preparing the production.”

Pfizer is also said to soon have enough data from clinical trials to seek emergency use authorization for the five to 11 age group, according to a report from Reuters. The US Food and Drug Administration (FDA) could clear the vaccine for use in younger children by the end of October, unnamed top US health officials told the news agency on Friday.

The vaccine to be used in younger children is the same as the one used for adults, but in smaller doses, Tureci explained. The company had already received trial results – which “look good” – and now only needs clearance from authorities, her husband, BioNTech chief executive Ugur Sahin, told Der Spiegel.

By the end of the year, the company is expecting to receive data from studies of the vaccine in even younger recipients, aged just six months old and above, according to Sahin.

In the summer, Israel green-lighted vaccination for children aged five to 11 with the Pfizer-BioNTech shots, in cases where there are risks of serious health complications. In the UK, the government’s vaccine advisory body has recently refused to approve coronavirus jabs for healthy children between 12 and 15 years old, recommending that only patients with underlying health conditions should receive the shot.

No anti-Covid vaccines have been so far cleared for use in children under 12 in the EU and the US.