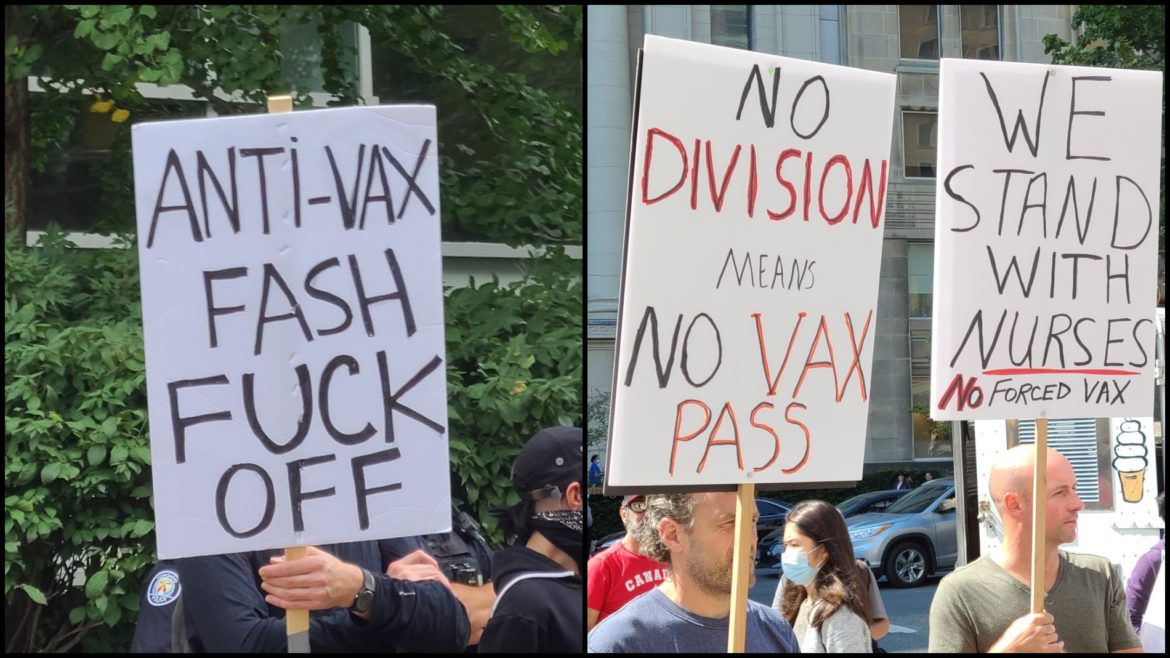 Protesters angry with mandatory vaccines held a protest in front of Toronto General Hospital Monday in “support” of hospital workers, despite the protest not being authorized by the hospital or the union. A group of people, some wearing black bloc, met with anti-vaccine protesters until police intervened to keep the peace.

A series of protests were held across Toronto on Monday in opposition to vaccine mandates and vaccine passports. A group of about 100 people met at the Ontario Legislature for a “silent protest.” At around 1 PM part of the group marched to Toronto General Hospital. Many protesters were seen carrying signs with phrases such as “we stand with nurses” and “no division.” Dozens of police officers formed a perimeter around the hospital. When asked if police were ready to respond if protesters “flooded” the hospital, Toronto Police on scene decline to comment.

A small group of Antifa-aligned protesters made their way to the protest, and some exchanged words with the anti-vaccine protesters. Police on scene separated the crowds, and prevented the situation from escalating. The Antifa protesters were seen with signs with phrases such as “anti vax fash fuck off.” There were no arrests at the protest, and nobody was injured. Internet sleuths raised the alarm that “PPC members” may try to “storm” or “raid” the hospital, but no attempts were made by protesters to do so.

Monday’s protests were condemned by Justin Trudeau. In a post to Twitter, Trudeau stated, “it’s unacceptable to block someone from entering a hospital or clinic, or to threaten a health care professional who’s providing care to a patient. We’re going to protect health care workers, patients, and their families.” In the attached statement, Trudeau pledges to make it a “criminal offence” to obstruct access to any building providing health services. Erin O’Toole slammed the protests, stating,

“No one should be permitted to obstruct access to a hospital. If necessary, law enforcement should be deployed to prevent this.”