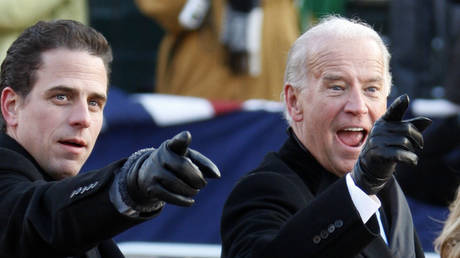 The Federal Election Commission has reportedly rejected a Republican complaint claiming Twitter gave Democrats an in-kind contribution by blocking the New York Post story about Joe Biden’s son Hunter ahead of the 2020 vote.

The part about the story being “unsubstantiated” was actually editorializing by the New York Times, which broke the news of the FEC decision on Monday. The commission has yet to officially publish the ruling or any explanations.

NEWS: The FEC has dismissed claims that Twitter acted illegally when it blocked users from posting an unsubstantiated Hunter Biden article.

Decision not public yet but sets a precedent for future cases involving social media sites and federal campaigns.https://t.co/egdp3KY1HV

Twitter executives “credibly explained” that they had commercial reasons for blocking the distribution of an article revealing the existence of Hunter Biden’s laptop and its contents, and had not coordinated with his father’s presidential campaign to do so, according to the Times. The decision “provides further flexibility to social media giants like Twitter, Facebook and Snapchat to control what is shared on their platforms regarding federal elections,” the paper opined.

The Republican National Committee, which had accused Twitter of making a de facto contribution to the Democrats by banning the distribution of the article, said it was “weighing its options for appealing this disappointing decision.”

Editorializing by the Times was met with derision from commentators across the political spectrum, who pointed out that the Biden laptop has been confirmed as authentic. After the election, Hunter himself said it “could have been” his, and admitted to “losing” another.

“[We]’ve all seen the videos from the laptop of him smoking crack with our own eyes,” tweeted Donald Trump Junior. “This is why the corporate media has lost all credibility.”

The New York Times STILL wants you to believe that Hunter Biden’s laptop is “unsubstantiated,” even though we’ve all seen the videos from the laptop of him smoking crack with our own eyes.

This is why the corporate media has lost all credibility.

“The only ‘unsubstantiated article’ that was circulating on Twitter at the time was the one from Politico declaring Hunter Biden’s laptop was ‘Russian disinformation’,” Fox News media reporter Joseph Wulfsohn pointed out.

The only “unsubstantiated article” that was circulating on Twitter at the time was the one from Politico declaring Hunter Biden’s laptop was “Russian disinformation.” https://t.co/6I2iqwH1dx

“We all remember when Twitter blocked every major media outlet from sharing unsubstantiated articles about Trump being a Russian asset/blackmail victim virtually every day for 3+ years,” noted Grayzone’s Aaron Mate – sarcastically, because that never actually happened.

It’s only fair. We all remember when Twitter blocked every major media outlet from sharing unsubstantiated articles about Trump being a Russian asset/blackmail victim virtually every day for 3+ years. https://t.co/fEtBikjHId

After the New York Post revealed the existence of a laptop Biden abandoned in a Delaware repair shop, and quoted some emails from it suggesting he was trading on the family name overseas, Twitter first blocked the story from being shared under the newly established “hacked materials” policy, then locked the Post’s account. The lockout lasted for over two weeks and was only lifted a few days before the election.

The Biden campaign responded to the story by calling it “Russian disinformation,” citing a letter by former intelligence officials – the same ones behind the original ‘Russiagate’ assessment – and denying the laptop’s authenticity.

Twitter appears to have used stories about a “hacker” threat, seeded by the FBI, to justify their reaction. According to the Times, the company told the FEC they had “received official warnings throughout 2020 from federal law enforcement that ‘malign state actors’ might hack and release materials associated with political campaigns and that Hunter Biden might be a target of one such operation.”