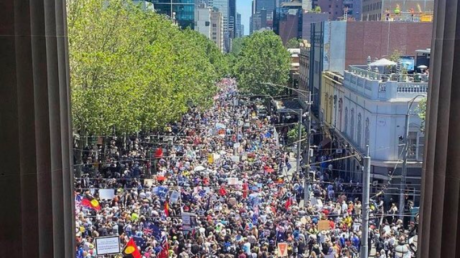 A fresh round of rallies against mandatory Covid vaccination has hit Australia, with hundreds of thousands protesting in dozens of cities. Aerial footage captured huge crowds blocking central streets.

New rallies all across the country happened on Saturday, as people demonstrated for more freedom in relation to coronavirus vaccination. Organized by the Millions March Against Mandatory Vaccination group, massive protests swept central Sydney, Melbourne, Canberra and Perth, along with 30 other cities and towns in Australia.

Protest against government restrictions and mandates underway in Sydney, Australia.

Protests are underway all across the country. pic.twitter.com/EcYSuqly52

Claiming that vaccine mandates are discriminatory, people protested outside parliamentary buildings and blocked central streets, calling for resignations in state governments and an end to what some call “tyranny.”

No official numbers have been published regarding attendances, but various media outlets reported that “hundreds of thousands” took to the streets this weekend. Aerial footage showed cities flooded with sizable crowds.

You know what time it is in Australia?

Time for a change of government!

Major protest today in #Melbourne (it’s 3:23pm on Saturday there right now). #Australia seems to be the beta test for what the globalists have in store for the rest of us…#MillionsMarch pic.twitter.com/92ByK4ahFX

In Sydney, people of all ages gathered in Hyde Park, carrying banners that read “Never lock down again,” and “Less government, more freedom.” In Melbourne, people protested outside the state parliament and blocked Spring Street while chanting “Sack [Premier of Victoria] Dan Andrews,” in an apparent expression of anger over his controversial pandemic powers legislation.

On the Gold Coast, protesters largely supported the leader of Australia’s right-wing One Nation party, Pauline Hanson. The senator, who has been trying to push a bill against mandatory vaccination policies, addressed the crowds, saying she had spoken with Prime Minister Scott Morrison and told him to change the constitution to facilitate her proposed legislation.

While the rallies were reportedly loud, with people cheering, beating drums and beeping horns, they were largely peaceful. In New South Wales, Health Minister Brad Hazzard officially allowed unvaccinated protesters to attend the Sydney rally, only asking they wear a mask and stay away if feeling unwell.