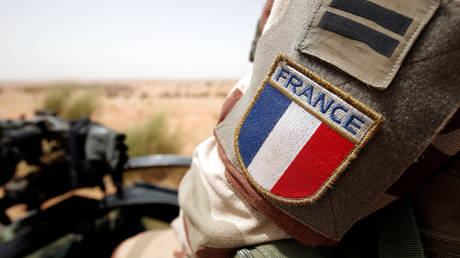 At least two people were killed and some 16 injured in Niger, when a French military convoy was met by protesters after crossing from Burkina Faso, where the column had been blocked for a whole week.

The French military convoy, redeploying from Ivory Coast to Mali, ran into fresh protests on Saturday. Shortly after crossing into Niger from neighboring Burkina Faso, it got blocked by angry locals less than 30 km (19 miles) from the border.

Footage from the scene circulating online shows a crowd of protesters standing in the middle of a road, with multiple armored vehicles and logistics trucks seen in the background. Thick clouds of black smoke were seen rising from a burning barricade placed across the road.

Protesters expressed their anger with the French enduring military presence, shouting “Down with France!” French servicemen had to fire “warning shots” to fend off the protesters, French army spokesperson Colonel Pascal Ianni has said.

“Protesters tried to pillage and seize the trucks,” Ianni said. “There were warning shots by the Nigerian gendarmes and French soldiers.”

At least two people were killed and some 16 injured during the chaotic protest, local mayor Hamma Mamoudou, told Reuters. The casualties were “most likely” inflicted by gunshots, the official claimed.

The convoy received a cold welcome in Niger after spending a week blockaded by protesters in Burkina Faso. Last weekend, the column became trapped in the Burkinabe city of Kaya by hundreds of protesters, who were venting their anger over France’s military presence, as well as over its inability to stop militant attacks that have been plaguing the region.