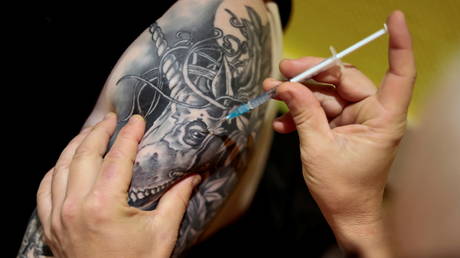 German police have shut down an illegal vaccination point at an airport in the northern town of Lübeck, saying that people who have attended it may have been injected with an unauthorized jab against Covid-19.

One of the offices at the airport in the Baltic Sea town of some 217,000 had been repurposed to serve as an improvised vaccination center, police said.

When officers arrived at the premises on Saturday they found a large crowd of patrons willing to get a shot. They said there were some 150 people in the check-in area and another 80 waiting outside.

The police shut down the vaccination point over suspicions that an unauthorized jab was being used there, which is a criminal offense under the German Medicinal Products Act. However, some 50 people had been injected with a makeshift jab before the law enforcers came.

No arrests were made, but the officers collected vaccine samples, documents and syringes, while also recording the personal details of those present. Further information on the case will be revealed in the coming weeks, law enforcement stated.

Stöcker, who founded Germany’s leading laboratory diagnostics company Euroimmun, had been making headlines during the pandemic due to claims that he’d developed his own vaccine against coronavirus.

The entrepreneur told Spiegel earlier this year that his jab had an efficacy of 97% and didn’t show any significant side effects. The vaccine is based on the tried-and-true “recombinant antigen that can be produced easily and cheaply in a test tube,” which would allow for a quicker vaccination of everyone in Germany, he insisted.

Stöcker had received three shots of his own vaccine in March, saying afterwards that he developed antibodies. He also injected some 100 patients with it, which led to criminal proceedings over “unauthorized administration of an unauthorized vaccine” being launched against him.

German regulators and medics were shocked that people had been getting shots of Stöcker’s product, which hadn’t undergone the required testing and clinical trials and had never received approval from the authorities.