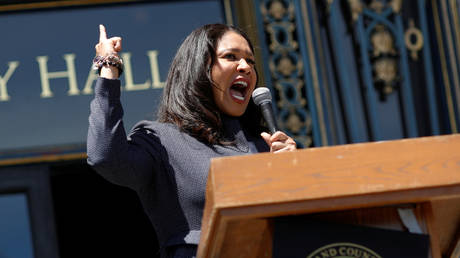 San Francisco Mayor London Breed is facing a backlash after being filmed dancing carefree and maskless in a club despite the city’s mandate. US President Joe Biden is meanwhile facing his own public-masking critiques.

The video of Breed, reportedly from this week, shows the mayor in a crowd, dancing and singing, seemingly aware she is being filmed.

Mayor London Breed feeling the spirit once again at a nightclub reportedly a few nights ago as our city continues towards its downward spiral with daily violence on the Asian community and numerous smash and grabs. pic.twitter.com/FvFxRwG1ri

Breed previously found herself attracting similar negative attention in September, when a video showed her dancing at a jazz club without a mask. She dismissed the publicity it attracted as a “distraction.”

The official has since been lambasted online for these violations. San Francisco has a strict mask mandate that applies to both unvaccinated and vaccinated individuals, and one is required to mask unless one is actively eating or drinking. The mayor’s latest carefree nightclub video was deemed particularly ill timed in light of the city having faced a wave of robberies in recent weeks, forcing numerous businesses to shutter their stores or limit their hours.

Her city has lost 22 WalGreens Pharmacies because of unchecked crime.

That’s not even the total number of pharmacies altogether. That’s just one chain. https://t.co/jXwVXHLRkA

San Francisco mayor London Breed dances maskless at a local club while the city goes to the hyenas. The city has a mask mandate for indoor areas, but clearly the rule doesn’t apply to city officials. pic.twitter.com/TP6pWs5h2B

President Biden’s public-masking habits have also garnered criticism. He was photographed this weekend in a store on the island of Nantucket that maintains a mask mandate with his face covering around his neck.

The photos swept across social media on Sunday, and include one of the president standing maskless behind a large sign on the door of the establishment warning that masks are required and featuring a graphic of someone masked.