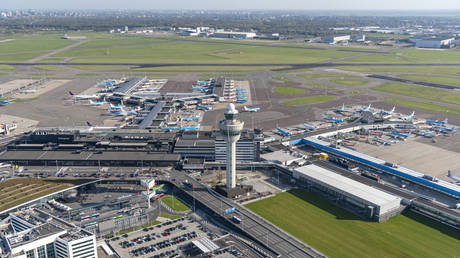 A married couple who fled a quarantine hotel for suspected Omicron strain carriers in the Netherlands have been removed from a flight by the Dutch military police just as their plane was about to take off.

The dramatic incident unfolded at Amsterdam’s Schiphol Airport on board a flight that was set to depart for Spain at ‘around 6.00pm’ Sunday, the Netherlands armed forces confirmed in a statement.

The Royal Netherlands Marechaussee at Schiphol has arrested a couple this evening who had fled from a quarantine hotel… The arrests took place in a plane that was about to take off.

The identities of the detained couple were not released, and it is unclear if they are were infected or just being held in quarantine as a precaution. The military turned them over to health officials to be sent to another quarantine facility.

The country is on high alert after over a dozen cases of the new Omicron Covid-19 variant were discovered among airline passengers – before all 27 EU members agreed to temporarily ban travel from seven southern African nations on Friday.

All recent arrivals into the Netherlands from South Africa as well as from Botswana, Malawi, Lesotho, Eswatini, Namibia, Mozambique and Zimbabwe have been required to be tested and to go into quarantine until their results are known, even if they are vaccinated. Some 61 out of a total of 624 passengers tested positive for Covid-19, so the Dutch National Institute for Health (RIVM) warned that “the new variant may be found in more test samples.”

“We will control whether they keep to those rules,” Dutch Health Minister Hugo de Jonge declared on Sunday, just hours before the escape attempt.