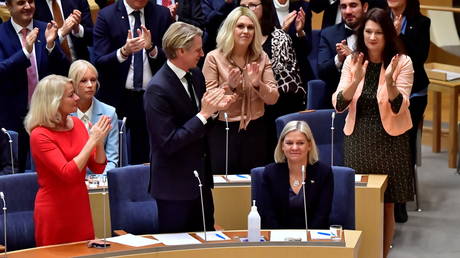 The Swedish parliament has again voted in Magdalena Andersson as prime minister. Last week, she resigned the position the same day she assumed it and became the first-ever female head of her country’s government.

Andersson, a former finance minister, threw in the towel just seven hours after her election five days ago. She announced her decision after a junior member withdrew from the minority ruling coalition following its failure to adopt a new budget and its approval of a competing variant proposed by right-wing parties.

On Monday, she returned to the helm of an even smaller minority government, formed only by the Swedish Social Democratic Party, which she has led since early November. It has 100 seats – less than a third of the total 349 seats in the parliament.

Her candidacy was supported by 101 legislators and rejected by 173, but still approved. Under Swedish law, the speaker may nominate a person for PM up to four times before a snap general election is called, and if the same candidate is proposed a second time, an absolute majority of 175 votes is needed to reject him or her, which was the case with Andersson.

Not only is Magdalena Andersson Sweden’s first female PM, she is also its second. That is quite impressive https://t.co/HBCUTIzzqK

Sweden was the last of the Nordic nations to elect a female head of the government. Since 2014, the country has rotated three different cabinets led by Andersson’s predecessor, Stefan Löfven. The latest of them was installed in July and automatically dismissed when its head resigned earlier in November. A new general election is scheduled for September 2022 and is expected to determine Sweden’s course on contentious issues such as immigration.