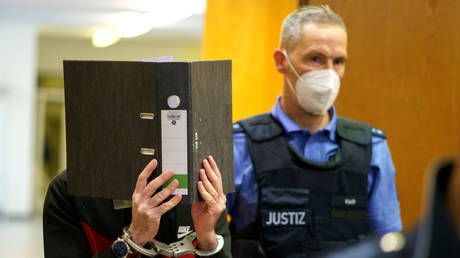 29-year-old former ISIS militant Taha Al-Jumailly has been handed a life sentence by a German court for genocide and crimes against humanity over the persecution of the Yazidi minority, marking the first conviction of its kind.

The Frankfurt court’s judgement marks the first time that a verdict has used the term ‘genocide’ in the conviction of an ex-ISIS fighter.

Having joined ISIS in 2013, Al-Jumailly was found guilty of genocide, crimes against humanity, war crimes, aiding and abetting war crimes, and bodily harm resulting in death.

Speaking following the conclusion of the case, Natia Navrouzov, a member of the non-governmental organization Yazda, celebrated the conviction.

“It is the first time in Yazidi history that a perpetrator stands in a court of law for genocide charges,” Navrouzov said as quoted by AFP, calling it a “historical moment for the Yazidi community.”

After the verdict was delivered, the court session had to be suspended because the defendant passed out.

During the case, prosecutors stated that Al-Jumailly and ex-wife Jennifer Wenisch bought and held Yazidis as slaves while living in Mosul during its ISIS occupation. After moving to Fallujah, Al-Jumailly stood accused of letting a five-year-old girl die of thirst after chaining her outdoors.

Wenisch was previously sentenced to 10 years behind bars for “crimes against humanity” and aiding and abetting the girl’s death by failing to stop her then-husband’s actions.

Germany has a significant Yazidi population, believed to be the largest grouping of the religious minority outside of Iraq. Yazidis – primarily from Iraq, as well as Iran, Syria, and Turkey – were targeted by ISIS due to the militant group’s view that they were heretics and did not follow true Islamic teachings. During the occupation of Mosul, it is thought that more than 6,400 Yazidis were kidnapped by ISIS.