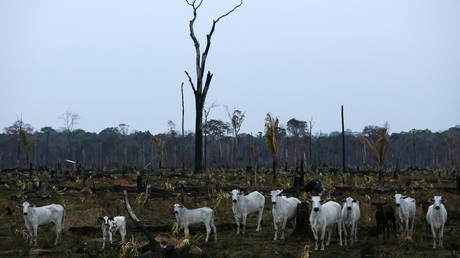 Brands like LVMH, Prada, H&M, Zara, Adidas, and Nike have connections to tanneries and other companies involved in the production of leather and leather goods that contribute to Amazon deforestation, a report has found.

In a study published on Monday by Stand.earth, a supply-chain research firm, dozens of household brands were accused of contributing to the deforestation of the world’s most important rainforest, the Amazon.

The researchers note that the deforestation of the Amazon rainforest is largely driven by the cattle industry, which in turn relies on demand for beef and leather. “Brazilian leather is used by tanneries and manufacturers around the world to make countless branded consumer-facing products including footwear and high-end fashion products,” the study claims.

In a “supply chain visualizer,” Stand.earth shows how dozens of high-end and high-street brands work with processors, many of which are Chinese, that in turn use products from tanneries which themselves use Brazilian hides.

The researchers, who analyzed nearly 500,000 rows of customs data, found that brands including Adidas, Nike, New Balance, Teva, UGG, and Fendi all had connections to Brazilian cattle.

More than 50 brands had multiple connections in their supply chains to links to the largest Brazilian leather exporter, JBS.

The firm is known to be involved in the deforestation of the Amazon rainforest, but recently committed to achieve zero deforestation across its own supply chain by 2035.

“With a third of companies surveyed having some kind of policy in place, [you’d expect] that would have an impact on deforestation,” Greg Higgs, one of the researchers involved in the report, told The Guardian. “The rate of deforestation is increasing, so the policies have no material effect,” he added.

The research group claims that deforestation related to cattle ranching in the Amazon accounts for almost 2% of global CO2 emissions annually.

Brazil, under the leadership of President Jair Bolsonaro, has been heavily criticized for failing to act on the continued deforestation of the rainforest.