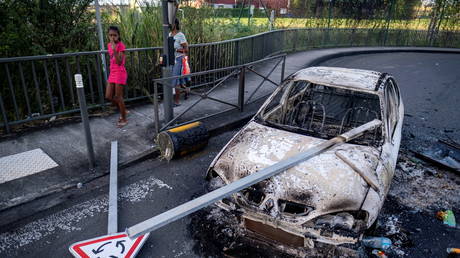 France has sent police reinforcements to its overseas territory Martinique after riots broke out in response to a mandatory Covid-19 vaccine policy for health care workers.

Some 70 armed French police officers, known in France as gendarmes, arrived in Martinique on Tuesday to tackle the violent protests, marred by arson, looting, and vandalism.

French Minister of Overseas Territories Sebastien Lecornu said in a press conference that “social dialogue is not possible without a sound basis and that sound basis is the re-establishment of freedoms… and our capacity to re-establish order.”

Civil unrest broke out after France imposed a vaccine mandate for health care workers in Martinique, which has reported low vaccination rates amid high levels of mistrust in the government and faith in natural medicine

As a result of the riots – which included an attack on the residence of France’s most senior official on the island – France revealed on Friday that it would be postponing its vaccine mandate.

Lecornu has blamed Martinique’s vaccine hesitancy on the island’s culture, saying, “I don’t want to stigmatise but the mistrust over vaccines is cultural.”

Protesters, however, have argued that they are unable to trust officials with their health after previous cases of misconduct. 95% of adults in Martinique have traces of a pesticide with links to cancer in their blood after it was consistently sprayed on the island for several decades.

Martinique was colonized by France in 1635 and has remained under French control despite independence efforts.