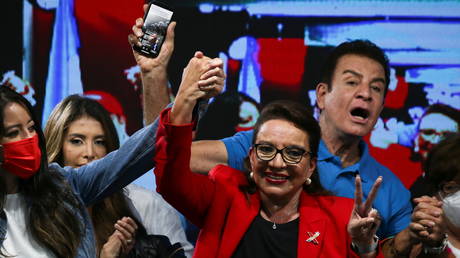 Asfura conceded the election after 52% of the counted votes showed Castro had a clear majority of 53% over Asfura’s 34% and he publicly congratulated her victory, saying, “I hope that God illuminates and guides her so that her administration does the best for the benefit of all of us Hondurans, to achieve development and the desires for democracy.”

US Secretary of State Anthony Blinken also congratulated Castro for becoming Honduras’ first female president and said the US was looking forward to working with her government.

Read more
Failed state made in the USA: Ex-president of Honduras and coup victim Zelaya tells all

“We congratulate Hondurans for the high voter turnout, peaceful participation, and active civil society engagement that marked this election, signaling an enduring commitment to the democratic process,” Blinken declared.

Castro previously served as Honduras’ First Lady between 2006 and 2009, up until her husband Manuel Zelaya was ousted in a military coup. Zelaya claimed the US was behind the coup and attributed it to his signing of Hugo Chavez’s Bolivarian Alliance for the Peoples of Our America (ALBA).

“The US warned me: If you sign the Bolivarian Alternative to the Americas (ALBA), you’re going to have problems with the US. I signed it, and six months later, I had problems,” he told RT America in 2019, adding, “When you give them competition in the free market, they stop being capitalist. They become retrograde, authoritarian, and they play coups, wars, invasions.”