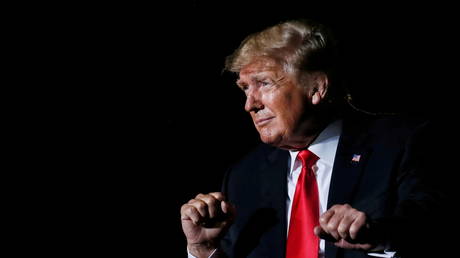 Donald Trump claimed Meghan Markle is “disrespectful” to the British royal family, and reportedly accused her of “horribly” using her husband Prince Harry in an interview with ex-UKIP leader Nigel Farage.

During the conversation in Florida, Trump told the Brexiteer that he had not been a “fan” of Markle since “day one.” A selection of the former US president’s comments were released ahead of the scheduled airing of the sit-down on GB News on Wednesday.

These included his belief that Markle was being “very disrespectful to the royal family and most importantly to the Queen,” who he described as a “great woman, such a great person, a historic person.” Trump reportedly added that Harry will someday “regret” letting himself be “used horribly.”

Here is what you can expect from my exclusive interview with Donald Trump. Watch it tomorrow at 7pm. 🚨

Later in the interview, Farage apparently remarked about Markle using stationery bearing her royal title as the Duchess of Sussex to lobby US Congress members on issues like paternity leave. In response, Trump noted that Markle is “trying to do things that I think are very inappropriate.”

Trump’s comments echoed those he has previously made about Harry and Markle, whom he branded as “nasty” in 2019. Meanwhile, Markle had called Trump “divisive” and “misogynistic” during the 2016 presidential campaign. The royal couple also urged voters to “reject hate speech, misinformation and online negativity” in the 2020 election.

In response, Trump told reporters that he was not a “fan of hers” and wished Harry a “lot of luck… ‘cause he’s going to need it.”

Earlier this year, Trump said he would campaign for the White House in 2024 after rumors surfaced about Markle “meeting with Democrat operatives” and weighing whether she would run for president.

“I hope that happens because if that happened, then I think I’d have an even stronger feeling towards running,” Trump told Fox News.

After the couple announced their high-profile move to the US last year, Trump had tweeted that “the US will not pay for their security protection. They must pay!”