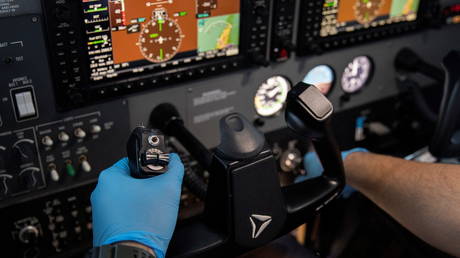 Allowing pilots to use simulators more instead of actual flights would be an efficient way to cut expenses during training, a senior US naval commander has said.

The military is determined to reduce the “pretty staggering” cost per flight hour to train pilots, Rear Admiral John Meier, the commander of Naval Air Force Atlantic, said at the annual Interservice/Industry Training, Simulation and Education Conference (I/ITSEC) in Orlando, Florida on Tuesday, as quoted by Defense News.

“One of the areas that I’ve got a laser dot on is how can we reduce some of that flying hours and increase more on the simulation side,” Meier said.

“The current balance of flights to simulation today is heavily skewed in flights for most aircraft,” he continued, adding that replacing some of the flights with training via simulation events in classrooms “would be a step in the right direction.”

Meier said simulator hours should not make up more than a quarter of total training time. He noted that the training to fly newer aircraft, such as the F-35 Joint Strike fighter and the P-8A Poseidon patrol plane, relies more heavily on simulations. Training to fly older aircraft, such as the F/A-18E-F Super Hornet, which makes up the bulk of the Navy’s fighter fleet, requires more live flying hours.

Meier told Defense News that existing technology allows for a shift toward more simulations without sacrificing the quality of training. He added that the change would let pilots focus more on “high-end tactics,” rather than on basic maneuvers.

The commandant of the US Marine Corps, General David Berger, said at the same event that the armed forces need modeling and simulation software that “replicates the adversary, whether it’s Russia or Iran” or others. “We envision our adversary thinking and operating and fighting like we would, which is a big mistake,” he said.