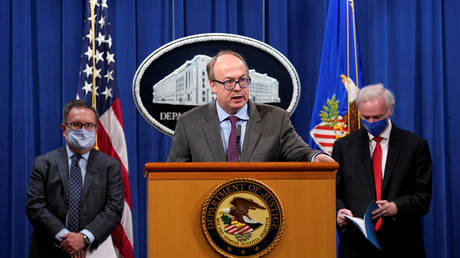 US Representative Bennie Thompson (D-Mississippi), who chairs the committee investigating the January 6 Capitol riot, has suggested that invoking the right to remain silent implies guilt.

Speaking to MSNBC host Rachel Maddow on Wednesday night, Thompson said former Assistant Attorney General Jeffrey Clark could face punishment of some sort if he follows through on a threat to plead his 5th Amendment right not to incriminate himself by answering questions under oath.

Asked by Maddow whether invoking the 5th Amendment suggests that there was “some kind of criminal activity” committed by Trump, Clark and other administration officials in the run-up and during the events on January 6, Thompson said, “Obviously, he is aware that something went on that’s illegal. And rather than be responsible and answer, he’s pleading the 5th.”

The congressman added that if Clark invokes his constitutional right against self-incrimination, “then in some instances, that says you are part and parcel guilty of what occurred.”

Such reasoning appears to be contrary to the US system of justice, in which the accused are assumed innocent by default. The US Supreme Court ruled in 1965 that a defendant’s pleading of the 5th Amendment right cannot be considered evidence of guilt.

Read more
‘Don’t get brazen with me!’ Judge in Rittenhouse case unloads on prosecutor (VIDEO)

Kenosha, Wisconsin, prosecutor Thomas Binger was admonished by Kenosha County Circuit Court Judge Bruce Schroeder last month for grilling accused murderer Kyle Rittenhouse, 18, as to why he had waited so long to tell his side of the story. Schroeder rebuked the prosecutor, saying, “this is a grave constitutional violation for you to talk about the defendant’s silence.” The teen was later acquitted on all charges.

The January 6 committee, which was appointed by House Speaker Nancy Pelosi (D-California), voted on Wednesday to recommend that Clark be prosecuted for contempt of Congress because he had refused to testify. Thompson said the criminal referral will be delayed until Saturday to give the former Trump aide one “last chance” to appear before the committee.