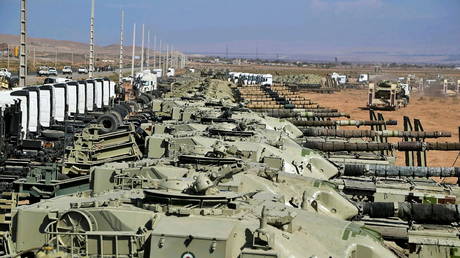 The leader of Iran’s Quds Force, specializing in operations abroad, has demanded that the US remove itself from the region and vowed to humiliate the world’s most powerful military should it make a wrong move against Tehran.

Speaking on Thursday, Brigadier General Esmail Qaani, of the elite Islamic Revolutionary Guard Corps and commander of the Quds Force, vowed to continue the defense of his country as he praised those ‘martyred,’ according to Iranian media.

Directing his comments towards Washington, Qaani said that the US should be prepared for a humiliation worse than that experienced in Afghanistan as he called on America to remove itself from the region once and for all.

Qaani claimed that for years, the US has crippled Iran with sanctions, but that tide has turned and it is now the Americans who will suffer. Noting Iran’s progress in both military hardware and other technical developments, the commander said that the US knows “if it makes the slightest move against Iran, its teeth will be crushed in its mouth.”

Relations between the US and Iran have not improved since the accession of Joe Biden to the presidency earlier this year. Former president Donald Trump oversaw a deterioration of relations, unilaterally cancelling the nuclear deal agreed under the Obama administration and enacting crippling sanctions on Tehran in 2018.

Attempts to bring the US and Iran back in line with the terms of the 2015 agreement, which put limits on Tehran’s nuclear ambitions, have not yet been realized.