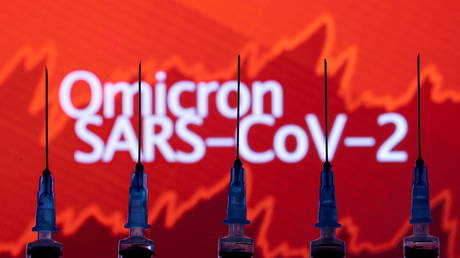 The new Covid variant has sparked panic since it was first detected in South Africa. Countries reimposed travel restrictions in an attempt to limit the spread – despite this, the strain has begun to conquer the globe.

Wednesday saw the US report the country’s first confirmed case of the Omicron variant in California, after a traveler, who was fully vaccinated, returned from South Africa on November 22. The country has decided to require a negative test within one day of travel for all arrivals, whether they are vaccinated or not.

Local officials have found three cases of Omicron, one on the Indian Ocean island of Reunion and another two in mainland France. In all the cases, the individuals had recently traveled through Africa.

Thursday saw India announce the nation’s first confirmed cases of the strain after two men in Karnataka state tested positive after returning from abroad. They have been placed under observation by government officials and all of their primary and secondary contacts are being traced and tested.

The Nordic nation has confirmed several infections of the Covid mutation, although one of those affected is known to have attended a concert with some 2,000 in attendance prior to testing positive. While a nationwide policy has not been introduced yet, Denmark closed a school that had a suspected case over fears it could lead to a wider outbreak.

Two individuals in the west coast municipality of Oeygarden tested positive for Omicron on Wednesday, marking the first cases of the variant in Norway, as the region suffered from a spike in infections that has led to a tightening of local restrictions. More worryingly for officials, the country is currently investigating a large cluster of at least 50 cases linked to a Christmas party.

Having reimposed Covid restrictions, including mask mandates, the UK Health Security Agency has confirmed that, across England and Scotland, 32 cases of the new variant have been detected, while Northern Ireland and Wales have not recorded a single new infection of the mutated strain.

Health authorities have recorded nine confirmed cases of the Omicron strain, with eight infections in New South Wales and one in the Northern Territory. Officials have put the country on alert, fearing there could be more cases after one of the infectious individuals visited a busy shopping center before testing positive.

The number of countries reporting the Omicron variant is growing, as on Thursday, Finland and Singapore confirmed the presence of the new strain, while Romania also fears it already has one case. This Covid variant concerns medics as it may present a challenge to vaccines. However, the World Health Organization insists that there’s still no scientific evidence about how grave the symptoms of the infection are compared with other Covid variants.