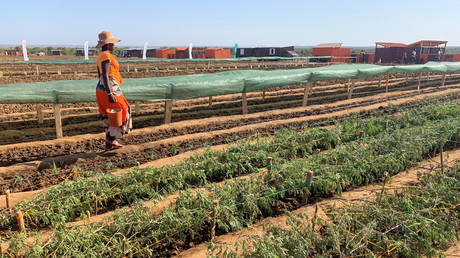 Earlier in November, the WFP claimed that extreme weather events, escalating in recent years, have resulted in five years of consecutive droughts, pushing thousands into famine. The UN’s assessment found that around 1.3 million people across Madagascar are experiencing acute hunger, with 30,000 suffering from famine.

However, new research contradicts the UN’s claim that this is the “world’s first climate-induced famine,” instead blaming the suffering on poverty. Madagascar’s poor infrastructure and the financial situation of individuals there showed that, “in many cases, we are not even prepared for today’s climate,” Maarten van Aalst, director of the Red Cross Red Crescent Climate Centre, wrote in the study. However, the analysis did accept that the hardship suffered is likely to be worsened by the weather events sparked by climate change.

Read more
Wind power becoming too cheap to support itself

“Even though we do not clearly see the role of anthropogenic climate change in this particular event, similar events will happen in the future, and will more likely be exacerbated rather than alleviated by climate change,” Piotr Wolski, one of the researchers, stated.

With droughts having plagued the region, researchers found that, based on the variable rainfall Madagascar can experience, in any given year, a drought currently has a one in 135 chance of occurring. While global warming is likely to slightly increase that, the analysis claimed it is not statistically significant, dismissing it as the main driver behind the five years of droughts.

As well as the impact that varying weather conditions can have on Madagascar, the latest research outlined how the recent situation emerged due to a combination of factors, including an infestation of crop-targeting insects and Covid-19 restrictions that hampered the ability of people to work.

Despite rejecting the link between global warming and the current food crisis, the study did urge nations to support Madagascar and other vulnerable places, preparing them for potential future climate-related issues, stating that governments have a “moral imperative” to offer aid to alleviate concerns facing at-risk countries, preparing them for future temperature rises.