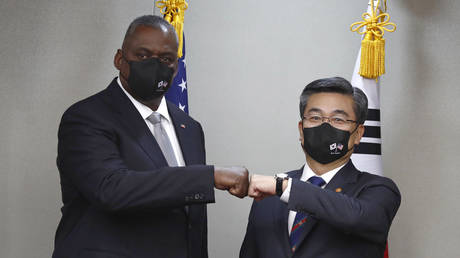 Washington and Seoul agreed on Thursday to update their joint war plans and maintain the current number of US troops in South Korea in response to a potential North Korean threat.

In a press conference on Thursday, US Secretary of Defense Lloyd Austin said the two nations had “discussed a wide range of topics, including our unity in the face of the threat from North Korea, and our progress in our bilateral alliance, readiness and training exercises.”

.@SecDef: Today, we completed the 53rd U.S.-ROK Security Consultative Meeting – the capstone annual event for our Alliance. And I’d like to give a sense of what we achieved. pic.twitter.com/BlHgGlv63w

Claiming the alliance contributes to stability in the region, Austin said that they had reaffirmed their “shared assessment that the DPRK is continuing to advance its missile and weapons programs, which is increasingly destabilizing for regional stability.”

The United States and the ROK remain committed to a diplomatic approach to the DPRK, and we continue to call upon the DPRK to engage in dialogue. But we also discussed measures to enhance our combined deterrence posture, and to defend against the full range of threats.

The US will maintain its presence of around 28,500 troops in South Korea, with the nation’s defense minister, Suh Wook, saying the two had discussed the transfer of operational control to Korean authorities.

The new document for wartime operation plans, the Strategic Planning Guidance, seeks to update the strategy for curbing a North Korean threat after critics claimed prior plans were outdated in the wake of the country’s expanding technology.