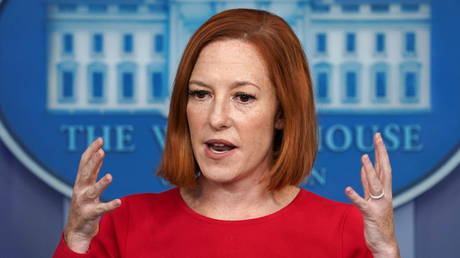 A rash of smash-and-grab thefts in the US by organized looting gangs is being caused at least partly by the Covid-19 pandemic, President Joe Biden’s press secretary has claimed.

“A root cause in a lot of communities is the pandemic,” White House press secretary Jen Psaki told reporters on Thursday when questioned about reasons for a surge in lawlessness, including mass looting incidents.

DOOCY: “What is President Biden going to do about all this lawlessness?”

PSAKI: “I think a root cause in a lot of communities is the pandemic.” pic.twitter.com/zl2jGaqrZi

Psaki didn’t elaborate on the alleged connection between Covid-19 and the shelf-clearing thefts at luxury goods shops in California and other states. The issue was raised amid record shootings of police, rising homicides, and a wave of brazen thefts plaguing retailers in major US cities.

In just one incident last month in Chicago, a team of thieves reportedly stole more than $120,000 in designer handbags and other goods from a Louis Vuitton store. One recent night of smash-and-grab thefts at numerous stores in San Francisco, including a Bloomingdale’s department store, was so severe that Mayor London Breed promised changes, such as limiting vehicle access in some areas, to make such crimes more difficult.

Organized looting marks just the latest in a wide range of troubles that the Biden administration has linked to the Covid-19 pandemic, including the supply chain crisis and a surge in inflation to a 30-year high. But critics have argued that failures to enforce laws in Democrat-run cities have triggered the lawlessness.

In San Francisco, District Attorney Chesa Boudin is facing a recall vote on concern that his “restorative justice” reforms are making the city more dangerous. Drugstore chain Walgreens has reportedly closed 17 stores in the area because rampant thefts have made the business untenable. Rival retailer CVS, meanwhile, has advised its employees not to pursue thieves because too many of its security officers have been assaulted.

Former President Donald Trump waded into the issue on Thursday, saying Democrat policies are blocking police from doing their jobs. “Our country is being destroyed,” he said in a Fox News interview. “It should never be allowed to happen. The police have to be given their power back. They have to stop the crime. They can do it, and they want to do it, but they’re not allowed to do it.”

Psaki said Biden has proposed additional funding – in fact, more than had been offered by the Trump administration – to help cities “keep cops on the beat” and “crack down on crime.” She added that in addition to the pandemic, guns are causing increased crime.