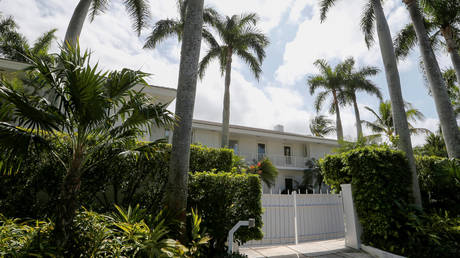 Juan Alessi, 71, looked after one of Epstein’s homes, having worked for him in Palm Beach for around a decade in the 1990s. On Thursday, he spoke about who and what he witnessed at the luxurious mansion during testimony in Maxwell’s sex-trafficking trial.

The now 59-year-old socialite accompanied Epstein at his Florida residence “95% of the time,” the man told the jury in Manhattan federal court. Having described her as a “pretty girl, a tall brunette,” he said “Ms. Maxwell was the girlfriend of Mr. Epstein, I understand she was the lady of the house.”

“From the day she came to the house, she right away took over,” he said, adding that while before her arrival he enjoyed a more relaxed and “cordial” relationship with his boss, the new hostess instructed him otherwise.

I was supposed to be blind, deaf and dumb,

Alessi said. The former home manager said he was only allowed to speak to his employer after being addressed by the boss first, with such orders coming not from Epstein, but his partner. She allegedly warned, “You should never look at his eyes. Just look at another part of the room and answer to him.”

Alessi also recalled similar instructions printed in a lengthy employee handbook apparently given to him by the woman. When asked by prosecutors to look through its pages and say if there are any passages he recognizes, the man read out loud:

“Remember that you see nothing, hear nothing, say nothing, except to answer a question directed at you. Respect their privacy.” He added that he found it “very degrading” at the time.

In his testimony, the man who had looked after the Palm Beach estate said his boss regularly enjoyed the company of “many, many, many” female guests there. He said most of them were supposedly in their twenties, but at least two girls appeared to be minors, namely Jane, and Virginia Roberts, now known as Virginia Giuffre, a longtime Epstein and Maxwell accuser.

Tasked with cleaning Epstein’s massage room, Alessi found sex toys, including an item that “looked like a huge men’s penis with two heads” and a “black vinyl or leather costume.”

The Maxwell trial is ongoing in New York, with the daughter of the former British MP and media magnate accused of being Epstein’s accomplice in sex-trafficking and sexual abuse of underage girls. After the American financier killed himself in jail, she was arrested in July 2020, but pleaded not guilty, with Maxwell’s lawyers saying prosecutors are scapegoating their client because Epstein is no longer alive.