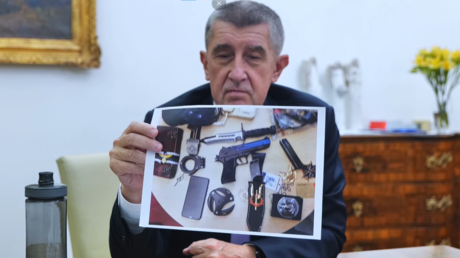 The outgoing prime minister of the Czech Republic has said that an armed man who was vehemently opposed to Covid-19 restrictions attempted to kill him, but was intercepted by security forces at the government office.

In a video posting on his Facebook page on Thursday, Andrej Babis said that police had thwarted an assassination attempt on him. “Yesterday, Wednesday, an opponent of the strict epidemiological security came to the government building and wanted to attack me, as he was carrying a dagger and a pistol. The police stopped him at the entrance to the building,” he stated.

The prime minister then lifted up a photo showing the alleged belongings of the man who he claimed had arrived at the government building with the intention of assassinating him.

Babis, who had been posting videos on his Facebook page, responding to questions and remarks from members of the public, made the comments in reaction to a man, David, who asked, “when are you going to stop murdering people?”

The acting PM said that David wasn’t the only person threatening him, and gave the story of the assassination attempt, but questioned why people were unable to face facts. Babis said that the authorities were doing everything they could to save lives. “We all do this for the people. Or do you not believe that this virus kills people? Do you not believe that the vaccine protects?” he asked.

A spokesman for the police said that an investigation had been opened. “The security service detained a man with some weapons. So far, I have no further information on whether it was a model or a real weapon,” the spokesman noted.

It is not the first time Babis has faced threats – in February, he told CNN Prima News that a man wanted to shoot him and his family. It was later revealed that the would-be murderer had written an apology letter.

Babis will soon be leaving office, with President Milos Zeman naming Petr Fiala as the prime minister of the Czech Republic on Sunday following October’s election. Babis has served as prime minister since 2017.