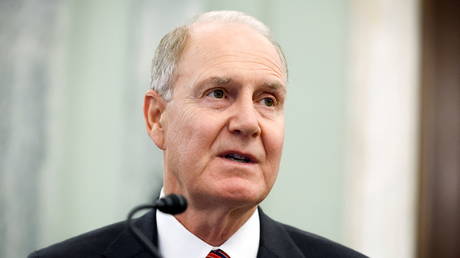 The CEO of Southwest Airlines claimed in a Senate hearing that wearing face masks to stop the spread of Covid-19 on flights is excessive and argued that high-end air filtration systems make planes the safest indoor space to be.

Southwest Airlines CEO Gary Kelly made the claim during a Senate hearing, Wednesday, on the financial support US airlines received during the Covid-19 pandemic.

After Delta Air Lines executive vice president John Laughter and United Airlines CEO Scott Kirby testified that the air on aircraft with HEPA filtration systems is the safest you can possibly breathe in an indoor environment, Republican Sen. Roger Wicker questioned whether Americans would ever be able to get on planes without wearing a mask again.

Boasting that 99.97% of airborne pathogens are captured by HEPA filtration systems, Kelly said, “I think the case is very strong that masks don’t add much, if anything, in the air cabin environment. It’s very safe, very high quality compared to any other indoor setting.”

American Airlines CEO Doug Parker appeared to agree with Kelly’s statement, adding, “I concur. The aircraft is the safest place you can be. It’s true of all of our aircraft, they all have these HEPA filters and the same air flow.”

Sara Nelson, the international president of Association of Flight Attendants-CWA, however, responded by noting that not all aircraft contain HEPA filtration systems. Nelson also argued that masks are one of the many layers keeping passengers safe, which include other measures such as aircraft sanitation, cabin crew protocols, and filtration.

Due to US Covid-19 laws set by President Joe Biden’s administration, Southwest Airlines passengers aged two and above are required to wear a face mask for the entirety of their flight. In September, the White House announced that the Transport Security Administration (TSA) would be doubling its fines for passengers who refuse to wear a mask.