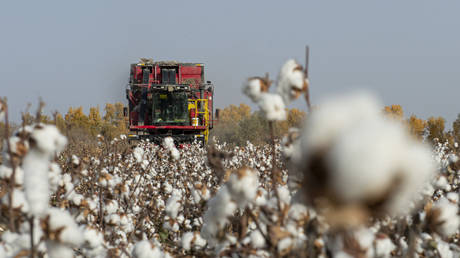 US President Joe Biden has signed into law a bill that effectively bans all imports of goods sourced fully or in part from China’s Xinjiang province. The measure is touted as combating forced labor.

The Uighur Forced Labor Prevention Act accuses China of keeping “as many as 1.8 million” Uighurs, Kazakhs, Kyrgyz, and members of other Muslim minority groups “in a system of extrajudicial mass internment camps” in the Xinjiang Uighur Autonomous Region.

Once the legislation comes into force, all goods that can be shown to have been produced in Xinjiang will be presumed to be made with forced labor and banned from entering the American market. US Customs and Border Protection will be authorized to issue waivers to importers who manage to submit “clear and convincing evidence” that their merchandise is not tainted.

While it remains to be seen how liberal the issuing of waivers would be, many observers predict that the law will constitute a de facto ban on all products sourced from Xinjiang. The policy dovetails with other US measures aimed at undermining Chinese economic and political power, like the campaign to convince US allies to join Washington’s diplomatic boycott of the Beijing Winter Olympics.

Xinjiang is a major producer of cotton, agricultural products like tomatoes, and polysilicon – a key component of solar panels. The Muslim-majority Chinese province also has a strategically important location bordering a number of countries, from Russia in the north to Afghanistan in the west to India in the south.

Critics of China have long been accusing Beijing of suppressing ethnic minorities living in Xinjiang through mass surveillance and incarceration, coercive birth control, and forced labor, accusing the Chinese government of an attempted genocide.

Commenting on Biden’s signing of the new legislation, Senator Marco Rubio, who co-introduced the bill in January, called it “the most important and impactful action taken thus far by the United States to hold the Chinese Communist Party accountable for their use of slave labor.”

It will fundamentally change our relationship with Beijing.

China says its policies in the autonomous region successfully curbed radical Islamist ideology and helped lift people out of poverty. The accusations of persecution, Beijing officials insist, are lies meant to justify unilateral measures adopted by the US as part of its great-power competition against China.

Liu Pengyu, a spokesman for the Chinese embassy in the US, called the new law a “severe violation of international law and norms of international relations.” He called on Washington to “stop using Xinjiang to spread lies, interfere in China’s internal affairs and contain China’s development,” and said Beijing will respond to the move.

Critics of the law say the US is acting hypocritically regarding Xinjiang. They argue that the clear benefactors of the import ban are US cotton producers and defense contractors who happen to stand behind vocal accusations against Beijing over the alleged use of slave labor.

It couldn’t be more obvious that this bill isn’t aimed at helping the Uyghurs in any shape or form but rather impoverishing them so they’ll – presumably – be more inclined to revolt.

Meanwhile, they point out, the damage will be done to Xinjiang workers who may lose their jobs due to American pressure if the restrictions work as intended.