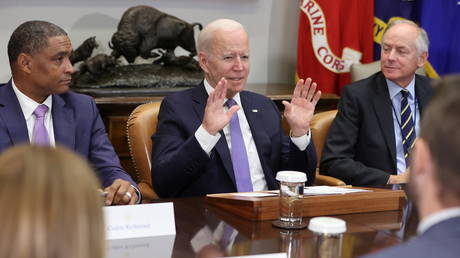 Jeff Ricchetti, brother of White House counselor Steve Ricchetti, has registered to lobby for a company behind a Covid-19 vaccine that is approved only in Taiwan, a new report has revealed.

The connection between Ricchetti and the Taiwan-based Medigen Vaccine Biologics Corporation was laid bare in a disclosure report first revealed by CNBC on Wednesday.

Ricchetti filed to lobby for the company earlier this month. His job will be focused on “issues related to Covid-19 vaccines accepted for foreign travelers to the United States.”

Ricchetti has lobbied the White House on behalf of other companies based in the healthcare industry before. Earlier this year, he also filed to work with Amazon on issues related to the delivery of Covid-19 vaccine shipments.

Responding to allegations of a possible conflict of interest, Ricchetti dismissed the claim, saying he had not mentioned his brother in talks with his partners or US officials, nor had he lobbied his close relative directly.

“I do not lobby my brother and I have not even mentioned to him the names of clients that I currently represent,” he told CNBC in April. “For the better part of the last thirty years I have lobbied members of Congress and their staff, and various individuals who have served in the successive administrations. It is what I do for a living.”

Medigen’s Covid vaccine is only approved for distribution in Taiwan. Ricchetti is currently the sole lobbyist for the company.

Ricchetti Inc. was founded by both brothers, though Steve Ricchetti has not been a registered lobbyist for years and stepped away from the company in 2012. He went on to work in Barack Obama’s administration, in which President Joe Biden then served as vice president.

The firm reportedly nearly quadrupled their earnings in the first three quarters of this year over the same period last year.