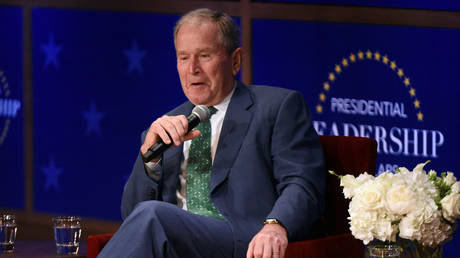 From the tragic to the comic, here’s a recap of some of the standout foreign policy snafus of the George W. Bush years

Newly released state papers reveal that George W. Bush admitted in 1998 he “did not know much about international affairs.” Winning the presidency two years later, Bush would go on to demonstrate this on numerous occasions.

The files, released by the British National Archives, reveal Bush told then-UK Ambassador Sir Christopher Meyer that, in Meyer’s words, “he did not know much about international affairs and that he would do well to broaden his experience.” Bush at the time turned down an opportunity to visit the UK as he was focused on the upcoming Texas gubernatorial election, but two years later he would find himself in office as governor getting a crash course in international diplomacy.

Here’s some of Bush’s even less shining moments.

Foreign policy is an arena defined by unspoken rules and protocol, with ‘don’t grope the German chancellor’ a seemingly obvious diplomatic commandment.

Yet Bush did just this at the 2006 G8 Summit in St. Petersburg, back when Russia was still invited to the group’s meetings. Strolling into a meeting room, Bush ambushed Angela Merkel from behind, attempting to massage the German chancellor’s shoulders. Merkel, taken by surprise, threw her arms into the air and shrugged off Bush’s impromptu massage.

Throw back to when G. W. Bush gave Angela Merkel the most awkward back-rub massage in the history of the world. pic.twitter.com/bwJA1XMbW6

The incident went viral on the internet at the time, and even in those years before the #MeToo movement existed, Bush was accused by Democrats of “sexual harassment.”

In a classic case of counting his chickens, Bush appeared on the deck of the USS Abraham Lincoln in May 2003 to declare the end of major combat operations in Iraq, less than two months after the war began. Draped behind Bush was a gigantic banner reading “Mission Accomplished,” and Bush himself said that “the United States and our allies have prevailed” in Iraq.


As it turned out, the war would soon turn into an insurgency, ISIS would rise to power, and although their combat mission would wind down significantly after 2011, US troops would remain in Iraq until the present day. The vast majority of American and Iraqi casualties, both military and civilian, would also take place in the years following Bush’s ill-timed speech.

The speech became a symbol of Bush’s unrealistic expectations for the war, and in 2009 he told reporters that “clearly, putting ‘Mission Accomplished’ on an aircraft carrier was a mistake.” Similarly, Bush admitted that not finding the weapons of mass destruction he assured the world Saddam Hussein possessed was “a significant disappointment.”

In 2005, Bush touched down in China several days after encouraging the Chinese Community Party to be more like Taiwan, which he said “has delivered prosperity to its people and created a free and democratic Chinese society” by embracing Western-style democracy.

As China does not consider Taiwan a separate country, Bush’s statement got the trip off to a bad start, and the president’s problems only piled up from there. Hassled by reporters over an apparently lackluster press conference alongside Chinese President Hu Jintao in Beijing, Bush snapped at a reporter who suggested he was “off [his] game.”

“Ever heard of jet lag?” Bush responded, before making for an exit. Foiled by two locked doors, Bush was forced to walk back to the podium to a chorus of laughter, where he told the journalists, “I was trying to escape. It didn’t work.”

Though some of Bush’s confidants insist that he was exceptionally well read and informed, the then-president often displayed a loose command of the English language, mangling common phrases and idioms, and seemingly inventing new words on the fly. Here’s a few of his most notable blunders on matters of foreign policy.

“Our enemies are innovative and resourceful, and so are we. They never stop thinking about new ways to harm our country and our people, and neither do we” – An unfortunate, and perhaps revealing, slip-up during a 2004 speech