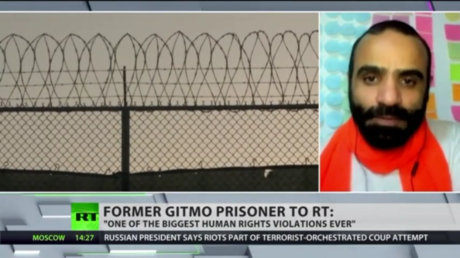 The abuses and injustices committed at Guantanamo Bay military prison hurt not only people locked up there, but the world in general, former prisoner Mansoor Adayfi believes. He spoke to RT as the jail turned 20.

Adayfi was one of hundreds of Muslim men sent to the infamous US offshore detention facility under the George W. Bush administration only to be held for years without trial and subjected to torture and other forms of degrading treatment.

“As prisoners, we lost years and years of our lives. Not just time. We lost everything. Also, our families were affected. For example, my family didn’t know where I was until 2007,” he said.

The Yemeni citizen arrived in Guantanamo in early February 2002, less than a month after the prison officially opened on January 11. He was released in July 2016, after Serbia agreed to take him in to live under intense surveillance. His home country at the time was engulfed in a bloody civil war and military intervention by a Saudi-led, US-backed coalition, which continues today.

The question that harrows him two decades after his life was derailed during a research trip to Afghanistan is why it happened to him, and the people who became his friends and brothers behind bars.

Adayfi said he was part of the majority of Gitmo prisoners who had no real ties to terrorist groups like Al-Qaeda. He and others were basically kidnapped and sold to the US government by greedy Afghan warlords, he said.

“We were sold to the Americans for bounty money. When they came to Afghanistan they would throw flyers offering large [bounties]. Some of us were sold two or three times from one warlord to another, then to the Americans,” he told RT.

An estimated 86% of Guantanamo detainees were handed to the US by the government of Pakistan or Northern Alliance fighters in Afghanistan. They entered American custody when such rewards for “suspicious people” were being paid. Adayfi cited this figure from a 2006 study by Seton Hall Law School, explaining how the foundation of Guantanamo was rotten from the start.

The prison was established as part of the Bush administration’s War on Terror – which was a war on Muslims, in the eyes of Adayfi and many others. Inmates “were tortured, imprisoned, abused and crushed in the name of 9/11 and in the name of justice,” he said. It was a perversion of justice that even most vengeful families of the victims of the September 2001 terrorist attacks would not condone, he believes.

After years of unfair detention and abuses, Adayfi said he went to a dark place, filled with resentment over his situation. He was eager to confess to being a terrorist just out of spite.

“I wanted [US investigators] to feel what they had created. For years we’ve been tortured. And they knew we’ve done nothing,” said Adayfi, who also detailed his experience in the book titled ‘Don’t Forget Us Here: Lost and Found at Guantanamo’.

“When someone drives you to this level of anger and hate, what do you expect?” he asked. “We [went through those emotions] not because we had a choice, but because someone was pushing us into that vicious circle. We tried to survive.”


Guantanamo is a “black hole” designed to operate outside of the US justice system, to infringe on the rights of detainees, Adayfi said. Using the threat of terrorism as justification, the Bush administration felt it “could cross any boundaries, they could go as far as they wanted, and there was no accountability.”

Those policies hurt not only terror suspects or people in countries the US bombed, but also America and the world in general, pulling it away from becoming a better place for all, he believes.

“Guantanamo, [CIA] black sites and the injustices that had been happening around the world cost us all our humanity, our love, our acceptance,” he said.

The only thing that can bring peace to this world is justice. It’s as simple as that.

Barack Obama promised to shut down Guantanamo when he took power, but that pledge remained unfulfilled. Donald Trump wanted to keep it operational, and he did. As Joe Biden was sworn into office almost a year ago, Adayfi and several other former Gitmo prisoners sent him an open letter asking him to close the prison, giving fair trials to or freeing the remaining 39 detainees.

“It’s not difficult, it’s not rocket [science], it’s not creating a new planet. It’s just justice, man,” he said. “We are asking for justice.”

A lack of political will in the US is the reason why Guantanamo is still open 20 years since it was created, Adayfi said.