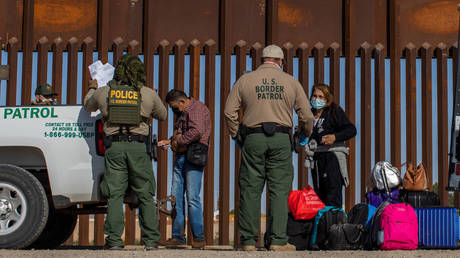 President Joe Biden’s administration has lost track of nearly 48,000 illegal aliens who were released into the US in a five-month period last year under a program designed to speed processing of surging migrant traffic.

Of the approximately 104,000 migrants who were issued notices to report (NTRs) between March 21 and August 31, 2021, fewer than 50,000 met their obligation to check in with an immigration field office within 60 days, according to Department of Homeland Security (DHS) data that came to light on Tuesday. More than 54,000 others ignored the requirement to report to Immigration and Customs Enforcement (ICE), including about 6,600 whose 60-day deadline hadn’t expired at the time the data was compiled.

“DHS data shows the practice of issuing NTRs has been an abysmal failure,” said US Senator Ron Johnson (R-Wisconsin), who recently obtained the figures in response to a letter he sent to DHS Secretary Alejandro Mayorkas last October.

The use of NTRs began in March 2021, when so many illegal aliens were arriving at the southern US border that the DHS needed to ease overcrowding at detention centers. Prior to then, migrants who were released into the American interior to await deportation proceedings were given notices to appear (NTAs). That meant setting court dates for the illegal aliens, which required more documentation and processing time.

But being given an NTA is a far cry from deportation, as the US immigration system is notoriously backed up, and many migrants simply decline to show up at their court hearing. Johnson noted that even among the nearly 50,000 NTR recipients who did report to ICE as ordered, less than 33% were given NTAs, meaning they still don’t have a court date looming and can remain in the US indefinitely.

The 54,000 missing NTR recipients were among more than 273,000 illegal aliens whom the Biden administration released into the US from last March through August. Johnson said those migrants face little chance of being removed. In addition to those who were issued NTAs or NTRs, many were paroled into the US without any notice requirements or court dates.

Illegal border crossings jumped to a record high after Biden took office last January and quickly began unraveling the enforcement policies of his predecessor President Donald Trump. Apprehensions of illegal aliens more than tripled to over 1.7 million in the government’s fiscal year that ended on September 30, according to US Customs and Border Protection (CBP) data.

CBP apprehensions surged to a 61-year high in calendar year 2021 after dropping to a 45-year low under Trump’s policies in 2020. CBP figures don’t include the untold number of illegal aliens who cross the border without being apprehended.