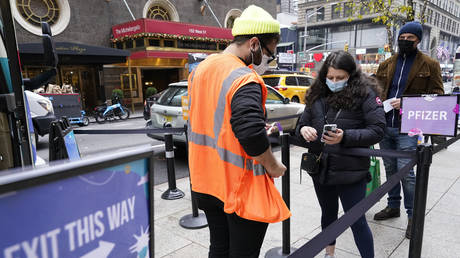 The White House has claimed the Supreme Court has blocked “common-sense life saving requirements for employers” by opposing President Joe Biden’s Covid-19 mandate on US businesses.

In a Thursday statement, the president said he is “disappointed” in the court’s decision and claimed his much-contested mandate for businesses with 100 or more employers were “grounded squarely in both science and law.”

Instead of enforcing the federal mandate, states and individual employers will now have to “determine whether to make their workplaces as safe as possible for employees” by separately requiring employees to get vaccinated, he added.

Taking a swipe at the court, Biden claimed that he was denied authority granted to him by Congress, and noted that he would be pushing for employer-imposed individual vaccine mandates regardless.

“I call on business leaders to immediately join those who have already stepped up – including one third of Fortune 100 companies – and institute vaccination requirements to protect their workers, customers, and communities,” he said.

A separate vaccination mandate pertaining to employees of federally funded health care facilities was upheld by the court in a 5-4 decision, with Biden saying it would “save lives.”

Biden’s mandate for businesses would have required private companies to enforce inoculations on their employees, or mask mandates and consistent Covid testing for those who opt out.

The Supreme Court ultimately ruled Biden overstepped his authority by enforcing this mandate through the Occupational Safety and Health Administration (OSHA).

“OSHA has never before imposed such a mandate. Nor has Congress. Indeed, although Congress has enacted significant legislation addressing the COVID–19 pandemic, it has declined to enact any measure similar to what OSHA has promulgated here,” the court wrote in the majority opinion on Thursday.

In his own response to the Supreme Court’s decision, former President Donald Trump said that it was tantamount to “confirming what we all knew: Biden’s disastrous mandates are unconstitutional.”