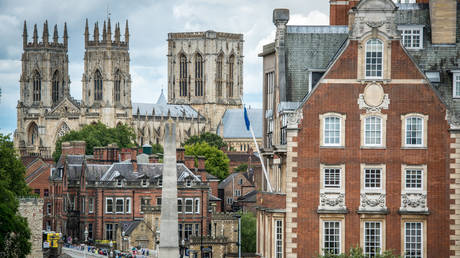 A councilor in York, England has started a campaign to strip Prince Andrew of his dukedom, claiming the embattled royal is not worthy of such a link to the ancient northern city. Andrew was stripped of his HRH style on Thursday.

In a tweet on Thursday, Darryl Smalley, a member of the City of York Council, took aim at Prince Andrew on the day that the royal lost his honorary military roles and gave up his HRH style. Andrew is facing a sexual assault civil case in New York.

“He is not fit to hold those titles, he is not fit to remain Duke of York. Our great city deserves better,” Smalley wrote on Twitter, responding to the Buckingham Palace announcement about Andrew.

Labour MP for York Central Rachael Maskell took up Smalley’s call and claimed it was “untenable for the Duke of York to cling onto his title another day longer” in a tweet.

On Thursday, Buckingham Palace announced that Andrew’s “military affiliations and Royal patronages” have been returned to Queen Elizabeth, noting that he would face his lawsuit in the US, linked to late convicted sex offender Jeffrey Epstein, as a private citizen.


On Wednesday, it was reported that recently convicted sex trafficker Ghislaine Maxwell had given up on her efforts to keep information concerning her criminal behavior with Epstein sealed by the courts.

The lawyer of Epstein accuser Virginia Roberts Giuffre, who is bringing the US civil suit against Andrew, had requested the information be made public.

A judge must now decide whether to release the material from Giuffre’s 2015 civil lawsuit against Maxwell which references eight anonymous men – it is not clear if one of them is the prince.

If unsealed, the document could shed new light on Andrew’s relationship with Epstein and Maxwell.

Giuffre alleges she was trafficked by Maxwell to the British royal for sex on a number of occasions when she was aged 17. The prince denies the allegations.

Earlier this week, the prince failed in an attempt to get the judge to dismiss the lawsuit against him on a technicality.

Andrew insists he has no recollection of meeting Giuffre, but a 2001 photo shows the prince with his arm around the then-17-year-old in London. Maxwell can be seen stood behind the couple.