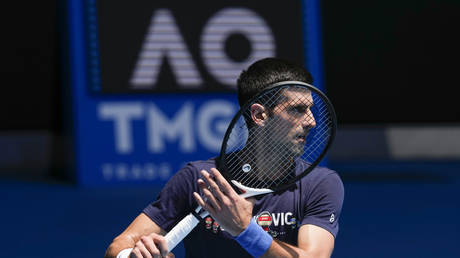 Australian immigration authorities have detained Novak Djokovic, arguing that although the Serbian’s medical exemption from the Covid-19 vaccination was valid, his views are too dangerous to let him stay.

Djokovic was detained at an address in Melbourne early Saturday morning, in line with a court order from the day prior, that saw Immigration Minister Alex Hawke cancelling the 9-time Australian Open champion visa.

Hawke cited Djokovic’s “high-profile status and position as a role model” while arguing that his “ongoing presence in Australia may foster… disregard for the precautionary requirements following receipt of a positive Covid-19 test” as he defended his decision to cancel the player’s visa.

“I consider that Mr Djokovic’s ongoing presence in Australia may lead to an increase in anti-vaccination sentiment generated in the Australian community, potentially leading to an increase in civil unrest of the kind previously experienced in Australia with rallies and protests which may themselves be a source of community transmission,” Hawke added.

Initially traveling down under to compete in the Australian Open set for Monday, Djokovic was denied entry into the country last week despite having a medical exemption for a coronavirus vaccination from Tennis Australia. That time, Australian border officials argued that his medical exemption was not enough to let him in, and his visa was revoked. Djokovich appealed the decision and had the court take his side, allowing him to remain in the country and train for the Australian Open. However, the reprieve was short-lived as his visa was cancelled for the second time, but on different grounds, on Friday.

Responding to the fresh visa cancellation, Djokovic’s lawyer told Federal Circuit Court Judge Anthony Kelly on Friday that the Australian minister’s argument appears to be “starkly different” from the one put forward by border officials when they cancelled the Serbian’s visa for the first time. Hawke acknowledged that Djokovic’s medical exemption was valid, but insisted that his views on Covid-19 vaccination presented a dire challenge to the Australian state.

The lawyer said that the argument that Djokovic’s presence at the tournament would fan anti-vaccine sentiment is flawed since it does not account for the fact that the tennis star’s potential deportation would likely cause bigger backlash.

Djokovich faces a 3-year-re-entry ban to Australia if he loses the court battle. His case is set to be heard in full by a federal court on Sunday morning.